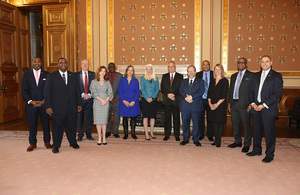 The Duke of Cambridge and Foreign Secretary joined Overseas Territories representatives and elected leaders in London for the ninth Joint Ministerial Council.

The JMC, which took place from 16 to 17 November, was the first in person since 2018. Amanda Milling, Minister for the Overseas Territories, chaired the plenary, with UK ministers from across Whitehall attending various sessions.

Over the course of the 2-day plenary representatives discussed a range of topics, including the wide-ranging effects of COVID-19, the protection of the OTs extraordinary natural environments, ongoing security and law enforcement collaboration, and economic resilience.

The Duke of Cambridge attended a reception of the JMC and spoke to delegates from the Overseas Territories of the need to tackle climate change. Alongside delegates, the Duke also met business leaders and a group of inspiring young people including students and climate advocates who are working to protect the environment and tackle environmental issues in their territories, which account for over 90% of the UK’s biodiversity.

The JMC welcomed the announcement of Blue Shield, the latest programme funded by the Blue Belt, to support maritime domain awareness so that Territories are better equipped to tackle illegal activities within their waters and ensure compliance with regulatory frameworks managing human activities in these fragile and diverse environments. Bermuda is the first Territory to sign up to the Blue Shield programme which has been launched this week.

At the conclusion of the JMC, UK ministers and Overseas Territories leaders agreed a joint communiqué.

Speaking at the opening of the JMC earlier this week, the Prime Minister Boris Johnson said:

I’m proud that Britain has been able help with vaccines and vital medical supplies, and as part of one big British family we will continue to put our arms around the Overseas Territories throughout this crisis for however long it takes.

As we face the greatest challenge of our lifetime, I’m acutely aware of the precious biodiversity at risk and as the delegations at COP26 made so clear, while your contribution to climate change is negligible, it is vulnerable island homes like yours that stands to feel the full force of the devastating effects of rising temperatures. We will spare no effort in this great struggle, and I want to commend the Overseas Territories for everything they are doing to protect precious marine environments, including more than 4 million square kilometres of the world’s ocean through the Blue Belt programme.

I am proud of the UK and the British family, and the real value the Overseas Territories bring to our family. As Foreign Secretary, I believe we have a positive proactive role to play in the world – promoting freedom, free enterprise, democracy and the rule of law. I want to ensure the Overseas Territories are an integral part of Global Britain and benefit from a confident UK, with an active presence across the globe.

I want the Overseas Territories to know they can rely on the UK, just as we have shown during the pandemic. So let’s strengthen our partnership for the years ahead.