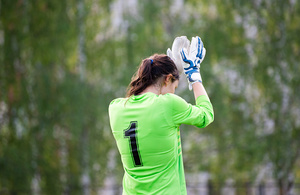 The Culture Secretary has announced the latest tranche of funding from the Government’s Sport Winter Survival Package, providing a boost to women’s sport.

The Women’s Super League and FA Women’s Championship will receive a combined £2.25 million of grant support for essential league costs, in addition to a proportion of 250,000 free Covid-19 lateral flow testing kits being made available by the Government to elite sports, with women’s sport designated as a priority.

In netball, England Netball and the Vitality Netball Superleague will receive a total of £4.2 million in grants, which has already provided the expanded league with the confidence to start its 2021 season on 12 February.

Badminton England will also receive a grant worth £1.3 million. The grant funding for England Netball, Basketball England and Badminton England is designed to cover essential costs to ensure the survival of these organisations.

This is the second tranche of funding to be announced from the Government’s £300 million Sport Winter Survival Package that is focused on helping those major spectator sports severely impacted by coronavirus restrictions survive the winter.

It follows the first announcement in January confirming that Steps 3-6 of the National League system will receive up to £10 million to protect the immediate future of approximately 850 clubs over the winter period.

We are committed to helping our treasured sports through these challenging times. And today’s announcement is more evidence of our support for them.

In particular, Women’s sport has faced acute pressures. The past few years have seen fantastic progress – with greater participation, employment, commercial opportunities and visibility in the media. I am determined not to let it take a back seat again.

This targeted funding will enable sports to keep playing and inspire many more stars of the future.

Following thorough conversations with each party to assess their individual needs, the Independent Board is pleased to be able to confirm a substantial package of survival funding for netball, badminton, basketball and women’s football, totalling over £10 million.

For those confirmed as recipients of support as part of this second tranche, this funding is vital in helping keep their respective clubs and leagues operational at this time.

Meanwhile an initial 19 clubs across Steps 1-2 of the National League system will be offered loan packages worth up to £5.4 million. Whilst discussions remain ongoing with other clubs across the system, clubs in Step 1 will also receive free Covid-19 testing kits from the Government.

It follows a provisional £11 million in low interest, long term loans being offered to clubs in Steps 1-2. Clubs are being assessed as quickly as possible to help those most in need.

In all, 250,000 free lateral flow Covid-19 testing kits worth £1.5 million are being made available to selected elite sports in need, due to the financial impact of testing on their ability to continue competitions as planned. It will ensure that the health and safety of elite athletes remains a priority, any Government funding directly benefits clubs and resources are not diverted to testing.

In addition to women’s football and National League Step 1 clubs, England Netball, the England and Wales Cricket Board (ECB) and Rugby Football League (RFL) women’s competitions are in discussions with the Government to take delivery of testing kits which will allow clubs to maintain their competitive schedules should they choose to do so.

It follows the Government recently acquiring new testing capacity. Testing kits will be distributed through the same channels as the Government-wide asymptomatic testing programme, with the current supply expected to support sports through to the end of March 2021. The offer will be extended to more potential recipients in due course.

We promised to support our national sporting life when we had to postpone the return of fans. Once again, we are doing just that. These free testing kits will help ensure the health and safety of elite athletes in competition remains paramount and mean resources can be focused on protecting the future of sports as we recover from the pandemic.

The Sport Winter Survival Package is a sector-specific intervention that is on top of the multi-billion pounds worth of business support that has been made available by the Government, including the furlough scheme, business rates relief and business interruption loan scheme that has helped many sports clubs to survive.

Further confirmations of funding from the Sports Winter Survival Package will be made in due course.

UK donates equipment to Peru to fight the COVID-19 pandemic