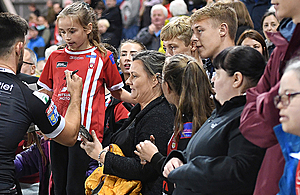 The Rugby Football League (RFL) will receive a £16 million cash injection to safeguard the immediate future of the sport for the communities it serves, the Government has announced.

The emergency loan will help the sport deal with the extreme financial impact of the coronavirus outbreak while the season remains suspended, due to social distancing measures.

It comes ahead of England hosting the Rugby League World Cup next year, which will see the men’s, women’s and wheelchair games come together for a world first on the sport’s biggest stage. The Government’s manifesto included a commitment to delivering a successful tournament, with significant financial support already provided.

This is a massive shot in the arm to secure the survival of Rugby League.

We recognise that many RFL clubs operate on very tight financial margins. Without their ability to stage matches with spectators and despite the Government’s extensive economic package, the professional game has come very close to collapsing.

From my first sports visit as Secretary of State to Leigh Centurions, I could see how important these clubs are to the communities they serve. They are the beating heart of their towns and cities, and their impact goes far beyond what happens on the pitch.

Sports across the board are facing unprecedented pressures, and we are supporting them through wider Government measures. In this case we are intervening as an exception, not to save an individual business or organisation, but to protect an entire sport, the community it supports, the World Cup held here next year and its legacy for generations to come.

Many Rugby League clubs have well-established charitable programmes in their communities, and have adapted these to help the vulnerable during the coronavirus pandemic. For example, Hull FC and Cheshire’s West Bank Bears have delivered food parcels to elderly people who are self-isolating, while players from Widnes Vikings and Warrington Wolves have been calling supporters to build connections and check in on their wellbeing.

The RFL will administer this funding, in partnership with Sport England and the Department for Digital, Culture, Media and Sport. All RFL Super League, Championship and League 1 clubs based in England are eligible to apply. Further details on when the fund will open and how clubs can apply will be announced by the RFL in due course.

Rugby League is a sport that makes a significant social impact in the communities it serves, which is even more important now as we respond to the economic pressures resulting from Covid-19.

The timing of the Rugby League World Cup next year will also be a fantastic opportunity to build on the sport’s strong track record within these communities, and is an opportunity that this Government’s support will ensure is delivered.

The RFL is grateful to the Government for understanding and acting on the case for the whole sport.

In these very tough times for the country and huge demands on Government, this is confirmation of why Rugby League is important – our USP – the sport’s significant social impact in Northern communities in particular.

Rugby League is not a wealthy sport but is rich in the things that matter most – outstanding sporting and life chances in often disadvantaged communities. The effects of lockdown at the start of our season genuinely threatened the survival of our clubs at all levels and their ability to continue delivering those positive social and economic impacts.

This support enables the sport to survive, to reshape and to be ready to restart in this our 125th year. And to look to a home World Cup next year and a legacy for our communities.

Watching and playing sport together, including Rugby League, has a role to play in the nation’s recovery. We are part of that national sporting landscape. In the meantime, we continue to work at the heart of our communities, helping wherever we can.

The 2021 Rugby League World Cup is to be hosted predominantly in the North of England with the wheelchair final hosted in Liverpool and the men’s and women’s finals being hosted at Old Trafford, Manchester.