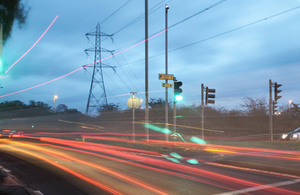 Better connections on local and national transport networks to bring all UK communities within closer reach of social and economic opportunities.

As the UK government publishes Sir Peter Hendy’s final report of the Union Connectivity Review, the Prime Minister has underlined the importance of better connections – on both local and national transport networks – to bring all UK communities within closer reach of social and economic opportunities.

The Prime Minister has particularly welcomed, and intends to accept, the proposal for the creation of UKNET – a strategic transport network spanning the entire United Kingdom.

UKNET will assess and map out for the first time the key points across the length and breadth of the United Kingdom that are essential to stronger, more direct transport connections.

This will help boost economic growth, support job creation and level up opportunity by expanding the transport system and creating quicker and easier travel for passengers, freight and businesses alike.

The UK government has invited the devolved administrations to work collaboratively in defining and developing the necessary improvements to union connectivity, supported by specific projects, which will inform the UK government’s response.

If we want to truly level up the country then it’s vital that we improve connectivity between all corners of the UK, making it easier for more people to get to more places more quickly.

Sir Peter Hendy’s review is an inspiring vision for the future of transport, which we will now consider carefully. Determined to get to work right away, we will set up a strategic UK-wide transport network that can better serve the whole country with stronger sea, rail and road links – not only bringing us closer together but boosting jobs, prosperity and opportunity.

Transport is key to binding the family of nations that is the United Kingdom closer together so that prosperity can be shared more evenly. It is not good enough that certain areas of the UK thrive while others fall behind. We must realise our full national potential and that means mobilising the resources and skills of all parts of this country.

I am indebted to Sir Peter for his work. We will consider his recommendations carefully, engage closely with the devolved administrations, and work collegiately to ensure these proposals strengthen the ties that bind us, now and for the future.

The independent Union Connectivity Review was launched in October 2020, led by Sir Peter Hendy CBE, to undertake how a detailed review of the quality and availability of transport infrastructure across the UK can support economic growth and quality of life.

Specific recommendations for improvements for connections across the United Kingdom include for improved connectivity with:

Scotland: proposals include reducing rail journey times and increasing capacity on the West Coast Main Line, and conducting an assessment of the East Coast road and rail corridor

Northern Ireland: upgrading the key A75 link to improve freight and passenger connectivity

Wales: improvements on the A55, M53 and M56, the South Wales Corridor, improvements to the North Wales Coast Main Line and rail links to the Midlands from Cardiff

The recommendations published today also include that the UK government should:

design and implement UKNET – a strategic transport network for the whole of the UK, and commit to providing additional funding to improve the network, in particular, the parts that are not performing well
plan improvements to the network using multimodal corridors, which should be reviewed regularly and appraised on a wider economic basis in order to support government objectives such as levelling up and net zero
support the development of sustainable aviation fuel plants in parts of the United Kingdom that are particularly reliant on aviation for domestic connectivity
Independent Chair of the Union Connectivity Review, Sir Peter Hendy, said:

I welcome the enthusiasm shown by the Prime Minister and the government to my final report and I look forward to their formal response to my recommendations, which aim to spread opportunity and prosperity right across the United Kingdom.

The UK government will now carefully consider the Union Connectivity Review’s recommendations in detail, working collaboratively with the Scottish Government, Welsh Government and Northern Ireland Executive to identify the solutions that work best for the people of the UK, and make tangible and meaningful progress as swiftly as possible.