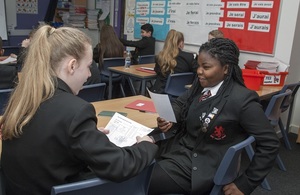 Despite being pivotal to the success of the government’s national English Baccalaureate (EBacc) ambition, the last 2 decades have seen a worrying fall in the number of pupils taking languages at GCSE, while uptake at A level has been in decline for even longer. Language study is required at key stage 3, but the trend in some state schools to bring GCSE choices forward to Year 8 has meant that large numbers of pupils are receiving only 2 years of language teaching in secondary school.

Since 2014 it has been a statutory requirement for primary schools to teach a modern or ancient language to pupils from age 7, but the quality of provision at key stage 2 is variable, with staff expertise, curriculum planning, time allocation and transition all cited as barriers.

The review notes that there are complex reasons why relatively few pupils in England opt to continue studying languages, including issues of motivation and the quality of transition between primary and secondary school. There can also be an assumption among leaders and teachers that some pupils are not able to do well in languages, such as those with lower prior attainment or SEND.

Ofsted recognises that there is no single way of achieving high-quality language education. The review explores the factors that might explain variation in quality and outlines why good curriculum design is crucial to ensuring that pupils securely learn the vocabulary, grammar and phonics that will allow them to manipulate the language for themselves.

The review identifies some common features of successful approaches to languages education:

The curriculum is carefully planned around logical pupil progression in the ‘3 pillars’ of language: phonics, vocabulary, grammar – and the interplay between them.
Teachers’ use of the language being taught is carefully planned and tailored to build on pupils’ ability and prior knowledge.
Teachers create opportunities for pupils to practise using the target language, helping them to remember long term the language structures they need to communicate in an unscripted way.
When authentic texts are used, they are well chosen for their linguistic content and level. Teachers plan their use carefully, ensuring that they do not expose pupils to large amounts of unfamiliar language.
Error correction is explicit where the focus is on accuracy: pupils are prompted that there has been an error and their own correction is elicited.
Assessments are carefully designed to align to a clearly structured and sequenced curriculum.
School leaders are committed to ensuring that language teachers have both a strong understanding of curriculum progression in languages and strong subject knowledge.
There is a well-considered transition process between primary and secondary school, and a curriculum that builds step by step across key stages.
Her Majesty’s Chief Inspector, Amanda Spielman, said:

Learning a second language can provide pupils with many wonderful opportunities and is a great discipline in itself. But we know that many pupils find languages difficult, or struggle to see the relevance of another language in their lives. Whatever the reasons, many barriers still need to be overcome before languages can really flourish in English schools.

For pupils to broaden their horizons, converse with people from other countries and explore other cultures, we need schools to build firm foundations in language learning. I hope this review helps raise the quality of languages education for all young people.