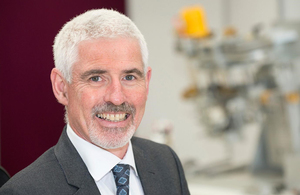 The UK Atomic Energy Authority’s (UKAEA) Robotics Director, Professor Robert Buckingham, has been awarded an Officer of the Order of the British Empire (OBE) for his services to robotic engineering.

The full New Year Honours list for 2021 recognises the achievements and service of extraordinary people across the United Kingdom.

Reflecting on the award, Professor Buckingham, said: “I’m thinking about what this OBE means for the future – for UK robotics, for fusion power plant design, for decommissioning, and the difference we can make together.

“Engineering is teamwork. As engineers, we can’t do anything significant as individuals, so this can only be a collective award – it is the UKAEA’s and the Remote Applications in Challenging Environment’s (RACE) honour,” he concluded.

The New Year Honours are a part of the British honours system, with New Year’s Day, 1 January, being marked by naming new members of orders of chivalry and recipients of other official honours.

The awards will be presented by Queen Elizabeth II or her vice-regal representative. They have been awarded at New Year since at least 1890.

The honours system celebrates the breadth of services given by people from all backgrounds across the UK.