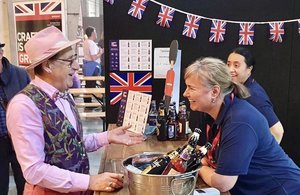 Eight of the UK’s most innovative breweries will feature on the UK’s Department for International Trade’s Great Britain stand at Beervana in Wellington from the 13 to 14 of August.

The 8 breweries featured on the stand are:

Britain’s oldest brewery, Shepherd Neame, founded in 1698 has repeatedly pioneered sustainable brewing methods. They recycle 97% of the grain and hops used in the brewing process and their waste management was restructured so they could convert it into biofuel. In 2013 Shepherd Neame also invested in a £3 million water recovery plant which enabled them to reduce their water consumption by 40%.

We are proud to be featuring 8 of the UK’s most innovative and sustainable breweries at Beervana 2021.

Beer is one of the UK’s top 3 food and drink exports with over 1 billion pints exported every year. Through the future UK-New Zealand Free Trade Agreement we will continue to strengthen opportunities to export high-quality British food and drink products so they can be enjoyed by a wider New Zealand audience.

Today UK breweries employ 870,000 people either directly or indirectly. Every job in brewing supports 18 employees in pubs, one employee in farming, one in the supply chain and one in retail.