On the fourth anniversary of the Uluru Statement from the Heart, UNSW’s Professor Megan Davis joins Pat Anderson and Noel Pearson to welcome the Sydney Peace Prize announcement.

The Uluru Statement from the Heart, issued to the Australian people in 2017, will be announced as the winner of the 2021 Sydney Peace Prize this afternoon.

Professor Megan Davis – UNSW Pro Vice-Chancellor Indigenous, Professor of Law and Balnaves Chair in Constitutional Law – has worked tirelessly alongside Pat Anderson AO and Noel Pearson to deliver the landmark Uluru Statement in 2017, after 13 Regional Dialogues with Aboriginal and Torres Strait Islander communities across the country.

In the four years since the Uluru Constitutional Convention, Prof Davis – a Cobble Cobble woman from Barrungam Nation – has led key education campaigns on the Uluru reforms and the road to a referendum, through initiatives at the UNSW Indigenous Law Centre (ILC).

“The Uluru Statement was the culmination of a dialogue process designed to take agreement and disagreement and elicit a pathway forward on the vital question of recognition,” Professor Davis said.

“This is a tribute to the men and women of the dialogues who crafted a roadmap to peace for the nation.

“We are accepting this prize on behalf of all of the First Nations that participated in the Uluru Dialogues and the National Constitutional Convention at Uluru in 2017,” Prof Davis said.

Prof Davis, Ms Anderson and Mr Pearson will jointly acknowledge the announcement in today’s ceremony and will receive the Prize together at a formal event later in the year.

From over 200 nominations from the community, the Sydney Peace Prize Jury chose the Uluru Statement from the Heart as a stand-out winner.

The Peace Prize Jury said the Uluru Statement brings “together Australia’s First Nations peoples around a clear and comprehensive agenda for healing and peace within our Nation”.

The Uluru Statement calls for a Voice to Parliament, enshrined in the Australian Constitution, and for a process of agreement-making (Treaty) and truth-telling. At Uluru, 250 First Nations delegates endorsed the consensus position reached at the 13 Regional Dialogues for ‘Voice, Treaty and Truth’. 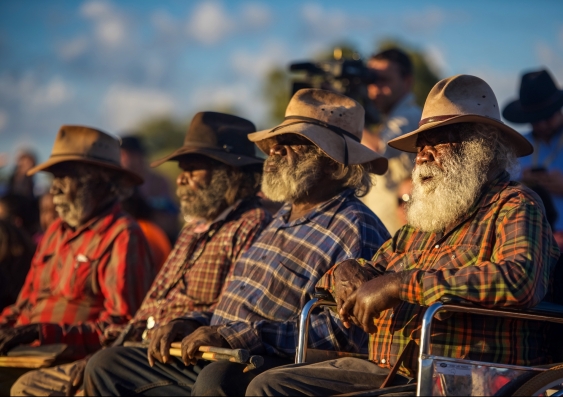 1200 First Nations people were involved in the 13 Regional Dialogues across Australia that led to the Uluru Constitutional Convention in 2017. Photo: UNSW Indigenous Law Centre

“The Uluru Statement was issued as an invitation to the Australian people to walk with us First Nations people to compel the politicians we elect to seek change and not be afraid of change,” Ms Anderson said.

Ms Anderson, an Alyawarre woman and Chairperson of the Lowitja Institute, was the co-chair of the Referendum Council in 2017 and has been a key driver of the reforms over the last four years.

“We walked together once before in 1967 and it was the highest ‘Yes’ vote in Australian history,” she said. “We are going to have another run at it.”

The Sydney Peace Prize is Australia’s only International Prize for Peace, awarded by the Sydney Peace Foundation at the University of Sydney. The Prize recognises leading global voices that promote peace, justice, and nonviolence.

“The Uluru Statement from the Heart is a powerful and historic offering of peace,” Archie Law, Sydney Peace Foundation Chair said.

“It is a landmark consensus document authored by the First Nations Peoples of Australia through multiple Regional Dialogues and the First National Constitutional Convention at Uluru in May 2017.”

“The Uluru Statement was the answer to the Commonwealth’s desire to recognise First Nations in the Constitution. The evidence four years later is overwhelmingly that Australians will support giving us a Voice. It’s time.”

The Indigenous Law Centre at UNSW has played an important role in legal scholarship on constitutional recognition and First Nations peoples over two decades.

UNSW has been at the “centre of the scholarship on constitutional change and legal reform for Aboriginal and Torres Strait Islander people” through the work of the Indigenous Law Centre, Prof Davis said.

“As a university community, we should be proud – and also continue to advocate for this important reform.”

New UNSW research on ageing to use Apple Watch and iPhone