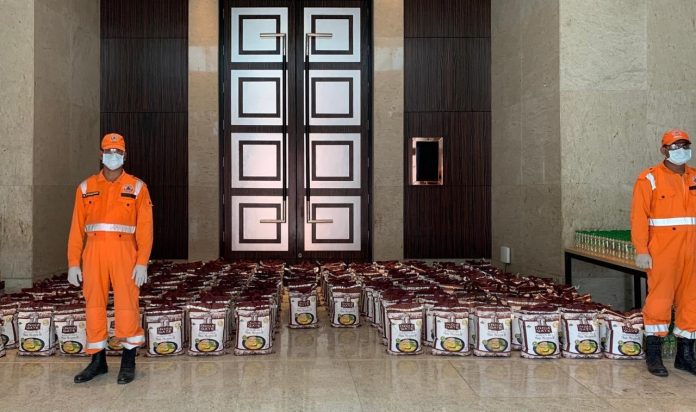 New Delhi: ​With the world facing an economic slowdown, corporates have a critical role to play, not only by addressing key societal needs, but also by becoming a key contributor in taking care of their local community. Today, as we continue our fight against the Covid-19 pandemic, a bigger problem of hunger is affecting millions across the country.

Since lockdown, KRBL Ltd a century old company and owners of India’s top rice brand India Gate Basmati Rice have been addressing this issue of hunger serving millions across India. India Gate Basmati Rice, flagship brand by KRBL – the world’s largest rice millers, recently launched #UmeedHainHum initiative, aimed at resolving the huge but important task of providing basic meals for all the needy and under-privileged across the country. So far, the brand has reached out in 140+ cities, feeding more than 15 million meals in the past three months, making it one of the largest and most impactful food donation drives in the country.

With this thought, Indian Gate has also released a video Share A Meal – https://youtu.be/ZUPcu7xJ3Ac. The video is about giving hope to one another when faced with adversity which is one of India’s old habits-India Ki Puraani Aadat.

Speaking on the campaign, Business Head – India Gate Basmati Rice – Mr. Ayush Gupta said, “These are difficult times for everyone and as one of the biggest and oldest brand of India, it is our responsibility to give back to the society who have trusted in our products for more than a century and especially to show our support to people in need. This initiative is our thoughtful effort to help people of India and take care of them. We take immense pride in this initiative and believe that through our actions, we deeply associate ourselves with the old Indian values of sharing and caring. Even going forward we strive to serve India as India Ki Puraani Aadat.”

Michelin Starred Chef Vikas Khanna and person behind #FeedIndia said, “#FeedIndia as an initiative has been extremely close to my heart and with partners like India Gate coming together and adding forces makes this journey even more enriching. For a food brand which is a household name to take up this responsibility and be so selflessly involving throughout the campaign throughout has been commendable.”

Some landmark support that India Gate took care of was organizing food distribution drive in Vrindavan to support many women living in ashrams and old age homes. The event happened in the Iskcon Temple of Vrindavan, distributing 2 Lakh meals to these women staying in several old age homes in this small city of Gods and temples. This is one of the biggest and most important initiatives organised by the brand to support the women residing at Vrindavan.

Another one, under their campaign #UmeedHainHum with #FeedIndia Campaign by Michelin star Chef Vikas Khanna, was a drive-in Mumbai to distribute food and essentials for the city’s very own dabbawalas and to the daily wagers Television staff of Mumbai. This project is mainly helping the largest feeding community of the world “The Mumbai Dabbawallas”. These are the people who are feeding Mumbai for more than a century, but now are struggling to get proper meals for themselves. The second group getting benefitted is the TV support staff of Mumbai. These are the people who work tirelessly to entertain entire India, but are now helpless with a pause put on the shooting, etc for the entertainment industry.

India Gate, being one of the oldest and leading rice brands in India, and a true custodian of hope had started – “Umeed Hain Hum”, an initiative that extends hope to a family in need by feeding them. The brand has been extending support to feed lakhs of people since the start of lockdown and has provided more than 15 million meals under their campaign #UmeedHainHum. It is an initiative to get food to old- age homes, orphanages and leprosy centres and millions of other families in India who are not only fighting against Corona, but also against hunger.