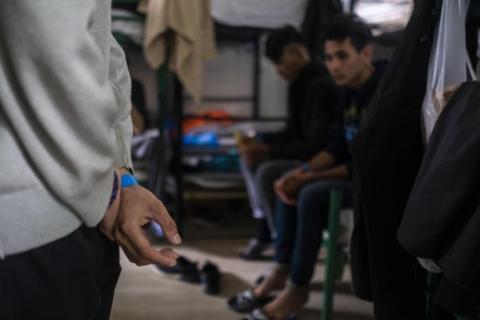 IOM, the International Organization for Migration, UNHCR, the UN Refugee Agency, and UNICEF, the UN Children’s Fund today welcomed the relocation of 12 unaccompanied asylum-seeking children from Greece to Luxembourg. The children, who had been living in overcrowded reception and identification centers for several months on the islands of Lesvos, Samos and Chios, arrived safely in Luxembourg this afternoon. Germany is in the process of relocating another group of unaccompanied children from Greece, who are due to arrive this weekend.

These are the first relocations under a European Union initiative for 1,600 unaccompanied children in which ten Member States have pledged to participate.

The three UN agencies greeted the arrival as an encouraging start in a larger effort to relocate vulnerable children from Greece in the coming weeks. The Agencies highlighted that the progress made by Greece, Luxembourg and Germany to relocate unaccompanied children is in line with the children’s best interests, considers their international protection needs and takes into account existing family ties.

The relocation efforts are humane, concrete demonstrations of European solidarity. The European Commission’s coordination role has also been crucial to help find Region-wide durable solutions for these particularly vulnerable children. The Agencies noted that there is a need to move beyond one-off relocation exercises and establish more predictable arrangements for relocation within the EU, for longer-term impact.

“The importance of this crucial initiative is amplified now due to the challenges we are all facing from COVID-19. Relocation of vulnerable children especially at a time of heightened hardship, sends a strong message of European solidarity and we hope to see this expand soon,” said Ola Henrikson, IOM Regional Director for the EEA, EU and NATO.

Today’s relocation of one girl and 11 boys, two of them Syrian and ten Afghans aged 11 to 15, has been led by the Governments of Greece and Luxembourg, with the support of the European Commission, UNHCR and IOM.

UNHCR, together with the European Asylum Support Office (EASO) and Greek NGO partners – Metadrasi and Praksis – has been assisting the Greek authorities in identifying unaccompanied children for relocation and determining their best interest, in close coordination with the Ministry of Migration and Asylum’s Special Secretary for the Protection of Unaccompanied Minors, Eirini Agapidaki. Best interest determinations were also completed for a group of unaccompanied children who arrived in Athens from the islands this morning and will depart for Germany this Saturday.

“Twelve children are today looking at a brighter future in a new country,” said Philippe Leclerc, UNHCR Representative in Greece. “UNHCR has worked tirelessly alongside Greece, EASO, and NGOs to ensure that the children’s best interests are fully considered. European countries must work together to share the responsibility with Greece and ensure that all unaccompanied children are safe and cared for.”

Prior to their departure from Greece, the children were transferred from the islands to an IOM facility in Athens. IOM conducted standard health assessments and medical examinations. Each child was tested for COVID-19, with all test results returning negative.

IOM organized the flights and “predeparture orientation sessions” for each child. Children were provided with information on what to expect during their journey and on arrival in Luxembourg. IOM escorts accompanied the children on the flight from Greece and ensured a safe handover of the children to relevant authorities and partners in Luxembourg.

On arrival, children must have safe, supported and community-based accommodation that facilitates their social integration, including during mandatory quarantine. Children should not be housed in large shelters or centres and will require rapid access to health care, psychosocial support, education and other essential services.

“I hope today’s successful relocation will spur other EU States that have made pledges to accelerate action in following suit,” said Ms. Afshan Khan, UNICEF Regional Director for Europe and Central Asia and Special Coordinator for the Refugee and Migrant Response in Europe. “This action is critical, because children identified for relocation are the most vulnerable and most in need of protection. It is also a tangible way to support the ongoing efforts of Greek authorities to look after the thousands of refugee and migrant children who will remain under their care.”

UNICEF, UNHCR and IOM have worked closely to establish standards for which children would be identified and prioritized for relocation. The agencies’ joint document, “Minimum Child Protection Standards for Identification of Unaccompanied and separated Children to be Relocated from Greece to other countries in the European Union” asserts that these standards must be firmly rooted within international child rights legal frameworks, including the Convention on the Rights of the Child, and the 1951 Refugee Convention which lays out the considerations under which international protection needs would be established.

In addition to international protection needs, several other principles should guide prioritization and selection criteria should be as flexible and open as possible to allow more categories of vulnerable people to be included in relocation. In all cases, the agencies say, a best interest assessment should always be completed to consider solutions in line with a child’s individual circumstances and best interests.

As of early April, there were more than 5,200 unaccompanied and separated children in Greece in urgent need of durable solutions, including expedited registration, family reunification and relocation. Among them, over 1,600 are exposed to severe risks, including exploitation and violence, and facing precarious conditions in over-crowded reception and identification centers on the Aegean islands. EU and Member State support is crucial to ensure their immediate protection in Greece, as well as their longer-term health and well-being including through relocation.

For School of Drama, mask-making takes on new meaning and urgency