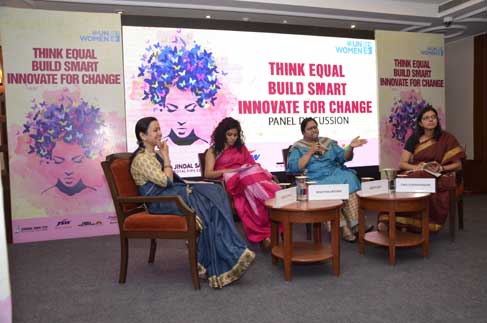 The O P Jindal Group pledged allegiance to the empowerment principles of UN Women. IWD 2019 theme of UN Women reflects the idea that people should have complete access to technology and finance, irrespective of their gender, for them to engage fully in the economy. Such engagement of all genders in an organisation fuels social as well as economic prosperity, irrespective of the sector. The event aimed at not only providing the right exposure to the issues and discrepancies faced by women at the management and employee ranks, but also to find a solution.

Deputy Country Representative, UN Women, Ms Nishtha Satyam, said, “We are proud to have collaborated with the OP Jindal conglomerate to champion our cause of empowering women, and to support the implementation of the 2030 agenda for sustainable development worldwide. Women dedicate almost 3 times more effort in unpaid work that contributes significantly to the nation’s GDP. Unfortunately, this is still not considered worthy of monetary payment in the system. There is a need to start measuring this contribution by women. With this year’s theme for International Women’s Day, UN Women is focusing on inclusive growth; infrastructure and innovation being key factors to developing smart cities. Out of the 193 countries making up the UN, India has the onus to demolish stereotypes and empower womanhood in its entirety.”

Apart from the corporate world, women are making a place for themselves today in some of the major all-male bastions, like transportation, masonry, plumbing, etc. However, a pool of opportunities in India still remains untapped. Statistics from various sources indicate that the situation of women is a graph of multiple highs and lows. As per Economic Survey 2017-18, it is observed that there has been a notable progress in the percentage of educated women from 59.4 percent in 2005-06 to 72.5 percent in 2015-16. However, in administrative roles, the survey reveals, only 9 percent women are members of legislative assemblies (MLAs) amongst 4,118 members across the country.

Although ‘Women in Business’, a global survey in 2018 by Grant Thornton, ranked India third in business leadership roles held by women consecutively for the third year, a lot still needs to be done. Despite unprecedented opportunities in ‘Innovation and Technology’, industry trends indicate a growing digital gender divide as women continue to be under-represented in the fields of science, technology, engineering, mathematics, and design. The gathering delved into measures to accelerate progress on this front by breaking the constraints that hinder women’s participation.

Govt SPMR College of Commerce organized webinar on “All About Group…