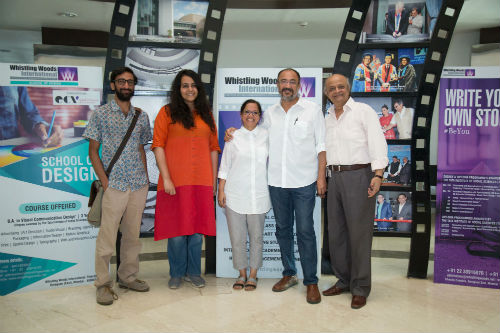 Mumbai: “Past is not something you really need to forget. Maybe embrace it and it will show you a new spectrum of life”, said Tanuja Chandra, the director and co-writer of the movie, Qarib Qarib Single. A detour from the cliché – Qarib Qarib Single is undoubtedly one of the most conversational and progressive movies of 2018. The masterminds behind this creation, Tanuja Chandra (Director and Co-writer), Gazal Dhaliwal (Writer) and Eeshit Narain (Cinematographer) in their conversation with Anjum Rajabali, HOD, Screenwriting, Whistling Woods International (WWI), brought about a very contemporary and fresh vibe, which led the students to stay captivated about the filmmaking process.

Initial part of the session unveiled the plot of the movie where Anjum Rajabali posed questions to Tanuja Chandra on her choice and belief in an unusual storyline of this kind. To which she said, “In today’s middle-youth where there is a held back love but the environment of dating apps and everything leads you to meet people and yet there is a kind of holding back, this juxtaposition to me is very interesting.”

In the same direction Gazal Dhaliwal added that one of the major reasons that gave the element of realism was that both Tanjua and her, wrote the script keeping the overall cinematic experience in mind and did not only focus on story-writing. Later during the session, Eeshit Narain educated that good cinematography cannot always be achieved by following the rules. Especially with this movie, he depicted his conceptualisation to Tanuja with photographs of his childhood travel to the places where the movie was to be shot instead of storyboards or shot divisions.

This talented trio depicted a strong sense of team work and reliability. With other educative visual techniques and narratives about filmmaking this is something that the students are likely to take home with them.

As Gazal Dhaliwal rightly quoted, “Tanjua always gives a lot of space to her collaboraters. She is extremely giving and extremely receiving at the same time”. This statement left students in great admiration and awe about the magic that team work could create.

With a tinge of humour and lessons from the trio the session ended with a Q&A with the students.The whole team was then bestowed with a token and applauds of appreciation.