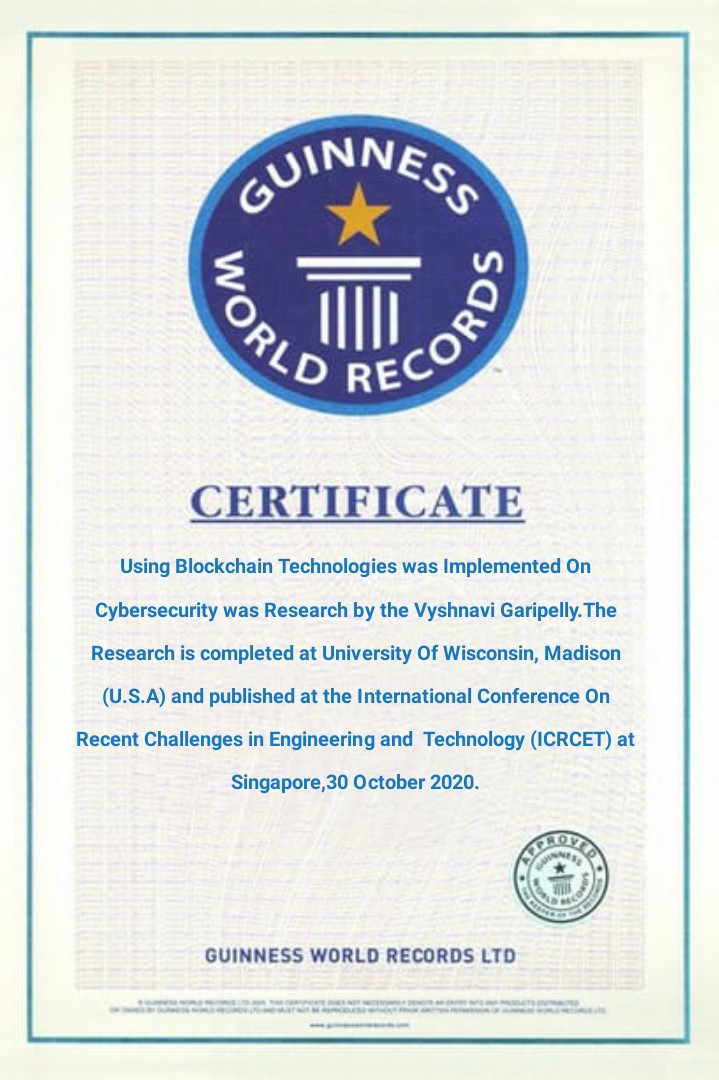 Who could have thought of implementing Blockchain in order to enhance cybersecurity before Ms Vyshnavi Garipelly? The answer is simple- No one. That is why Ms Vyshnavi has been able to secure a Guinness Record with her pioneering research “Using blockchain technologies implemented on cybersecurity”, which was published on International Conference on Recent Challenges in Engineering and Technology (ICRCET) on 30 October 2020. Ms Vyshnavi is currently in the final year of her Computer Science and Engineering undergraduate degree.

Blockchain enables security systems, deployed in organizations, to use distributed key public infrastructure to authenticate devices and users. Blockchain’s robust DNS entry approach can improve security by removing a single target that can be compromised. At the same time, it provides the ability to resolve single attack points and multiple targets, such as a database, network, or data centre, at a single access point, and provides the ability to resolve a single point of attacks while simultaneously resolving multiple target attacks, such as a server-sided attack. She has explored the possibility of Blockchain Technology into two significant areas of Cyber Security­­—

Implementing Security in Private message
With the internet shrinking the world into a global village, more and more people are joining social media. The number of social media platforms is also on the rise. More social apps are being launched with each dawn as conversational commerce gains popularity. Vyshnavi’s research has a massive impact on society, as in the recent past, numerous attacks have been executed against social platforms like Twitter and Facebook. These attacks resulted in data breaches with millions of accounts being hacked and user information landing into the wrong hands. Blockchain technologies, if well implemented in these messaging systems, may prevent such future cyberattacks.

Transaction security developed by COIN APP
COINAPP is an easy-to-use cryptocurrency application for resource-constrained businesses, that are not currently equipped to handle the ledger information securely. COINAPP replaces third-party transaction vendors, and it keeps all transactional data between two peers encrypted. The boosted level of security helps companies to keep transparent records in a public sphere.