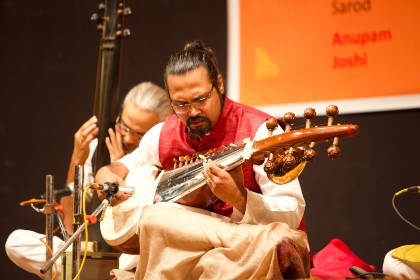 Bengaluru: “When we think of Japan, we think of it as an insular culture. However, Japan and India share many cultural similarities such as festivals marking the changing seasons, rituals and art inspired by nature, and an adherence to the lunar calendar,” said sarod artiste and Japanese language expert Anupam Joshi, in his talk, ‘Identifying Our Shared Identity! Astonishing Cultural Similarities between India & Japan’, as part of the ‘Tatsujin – Speak’ – a seminar series hosted by the India Japan Study Centre, an IIM Bangalore Centre of Excellence.

‘Tatsujin – Speak’ or ‘Expert-Speak’ aims to bring high-quality information and insights about select areas of India-Japan interactions to interested members of the public.

Joshi cited the example of folk arts such as Kabuki (Japan) and Kathakali (Kerala, India), Koli (Maharashtra, India) and Soren Bushi (Japan). “Kabuki and Kathakali are similar in stylized gestures, symbolic yet minimal dance moves, plenty of eye and facial expressions, dazzling costumes, elegantly designed wigs and elaborate make-up for male artistes. The phrase ‘heave ho’ is repeated in both Koli and Soren Bushi (the dances of fisherfolk in India and Japan) to encourage the fishermen to row faster,” he explained to make his point. Another example which Joshi San gave was of koshogatsu, a Japanese harvest festival, which is celebrated in a similar manner as Makar Sankranti, in India, by offering the harvest/ produce to the divine power, and with dedicated songs and dances.

Joshi touched upon some common social practices in India and Japan such as offerings made to gods (shagun), removing footwear before entering a house, etc. He also spoke on the meaning and phonetic parallels between words, idioms and artistic expressions in Indian and Japanese cultures. According to him, a number of words in the Japanese language find their roots in languages such as Urdu, Sanskrit, etc. He elaborated on the examples of ‘Ittekimasu’ (loosely translated as ‘I will go and return’), used every time a person leaves home, and ‘Isseki Nichou’, equivalent to ‘Ek teer, do nishane’ in Urdu.

Joshi also addressed the similarities between nirgunbhakti in India, that is, the practice of nature worship, and Shintoism in Japan. “When poet Kabir wrote about nirgun, he broke away from his traditional doha and wrote the 4-line stanza, which is similar to Haiku in Japan,” added Joshi san.