Young persons are usually the primary victims of violent extremism and conflict. When violence sets in, young girls and boys begin to live in fear, their dreams fall apart – they cannot have a decent education, turnover in their businesses fall, job opportunities diminish, food prices increase, the cost of transport skyrocket, etc. Rather than living positive lives and fulfilling their dreams, they are unfortunately compelled to join fighting factions and terrorist groups.

As part of efforts contributing to the prevention of violent extremism, five exemplary young leaders of youth-led organizations have stepped up to the challenge by implementing Early Warning, and Early Response (EWER) mechanisms to conflict within five councils in Cameroon – Buea City Council, Douala IV Council, Babadjou Council, Kye-Ossi Council, and Maroua I Council.

These young leaders include- Christian Achaleke of Local Youth Corner (LOYOC), Loic Atangana Nkulu of the Pan-African Network for a Culture of Peace (PAYNCOP), Brice Nisebang of the Cameroon National Youth Council (NYC), Paul Bernard Noah of “G-54 Afrique Avenir” and Gladys Tchegoue of Dynamique Mondiale des Jeunes (DMJ). Other youth leaders equally participated in this initiative such as Desmond Ngala of Rog Agency for Open Culture, Stephane Mebonde of Accord Parfait and Ramatu Abdou of the Association for the Welfare of Women and Indigenous Persons (ASOWWIP). 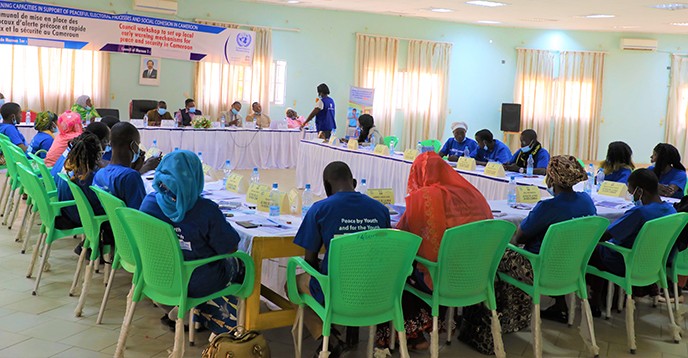 Youth-led early warning and response mechanisms consist of building dialogue and trust between youth and local administrative, traditional, and religious authorities as well as forces of law and order and women community leaders as a means of preventing conflicts from triggering or escalating.

UNESCO, through the Peacebuilding Fund, is providing technical guidance and financial support to these young leaders as well as facilitating their interaction and credibility vis-à-vis the competent authorities.

Feedback from authorities has been high. For instance, Mrs. Akawoh Minerva epse Molinge, 1st deputy Mayor of Buea council welcomed this initiative and commended the youth leaders for proactively tackling the issue of violence in the community.

Mr. HAPPI DE NGUIAMBA Joseph Victorien, Divisional Officer of Kye-Ossi underscored the pertinence of the initiative for Kye-Ossi, which as a border town hosts diverse populations from Cameroon, Gabon, and Equatorial Guinea. Ensuring peaceful co-existence of peoples is a daily effort for its authorities he stressed.

Adama Illyassa, an Imam in Maroua, and Samadel Kaskam, an evangelical pastor in the same city gracefully integrated the Task Force of the early warning and response mechanism and are committed to building trust and peaceful co-existence between natives and internally displaced persons in Maroua. Maroua is home to several persons fleeing the devastating effect of terrorism perpetrated by Boko Haram in the Far North Region and in such conditions, the social integration of IDPs in the community is not always a smooth process. 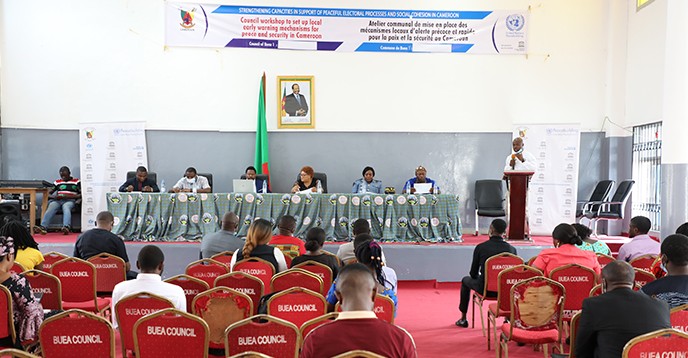 Youth-led early warning mechanisms transform perceptions on young persons. They portray youths as responsible, solution providers, concerned, and proactive about preventing violence in their communities, stakeholders to engage for durable peace to be achieved.

Early warning mechanisms are an organized framework for community dialogue and peaceful living together led by young persons.  UNESCO in collaboration with authorities and other partners will continue to support these mechanisms and scale them countrywide, beyond the 5 pilot councils for the preservation of peaceful coexistence in Cameroon.

Successful Outreach of the UNESCO Lecture Series: Earth Materials for a Sustainable and Thriving Society

iednewsdesk May 18, 2022
A new £58 million Global Innovation Institute (GII) is on course to open in Belfast by 2025.The Institute is an…

University of Manchester: Treatment for commonest form of blindness…