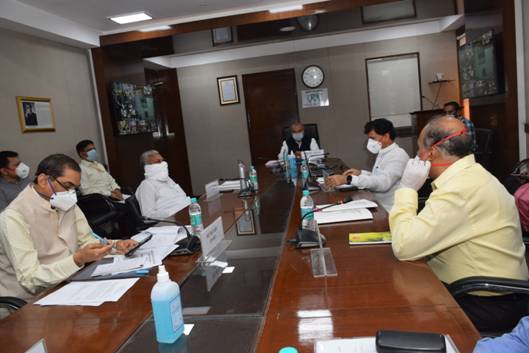 New Delhi: The Union Minister of Agriculture and Farmers’ Welfare, Shri Narendra Singh Tomar has said that all States should aim to achieve the kharif target and doubling of farmers’ income should be taken up in mission mode. Addressing the National Conference on Kharif crops 2020 through video conference, he assured the States that the Government of India will remove any obstacles that the States are facing.

The main aim of the National Kharif Conference was to discuss various issues and list out steps in consultation with the States about preparedness for Kharif cultivation in view of the lockdown situation.

Shri Tomar said that the extraordinary situation due to the Coronavirus has to be met with a fighting spirit by the Agriculture sector and everyone has to rise to the occasion and perform. He said the Prime Minister Shri Narendra Modi has ensured that “Goan, Garib aur Kisan” (Village, Poor and Farmers) do not suffer during this crisis. Shri Tomar urged the states that the two schemes, – PM Fasal Bima Yojana and Soil Health Card scheme, should be explained to each farmer.

The Minister informed the States that the All India Agri Transport Call Centre has been started to ensure that Agriculture is not affected due to the lockdown. He also asked them to use e-NAM extensively. Shri Tomar called upon the States to implement the Union Home Ministry exemptions and relaxations for Agriculture sector while ensuring social distancing and social responsibility norms.

The Minister of State for Agriculture, Shri Parshottam Rupala, while addressing participants of National Conference, said benefits of the PM Fasal Bima Yojana should be explained to the farmers. Shri Rupala said that agriculture and horticulture sector in our country has become a key driving element for economic development in many States. Besides having record foodgrains production last year (2018-19), country has also produced about 313.85 million metric tonnes of horticulture produce from an area of about 25.49 million hectare, which accounts for about 13 percent of the total world production of fruits. India is the second largest producer of vegetables, after China, he said.

In his address, the MoS (Agriculture) Shri Kailash Choudhary said that in the present situation of climatic change along with change in rainfall pattern, achieving record foodgrains production of about 285 million tonnes in 2018-19 which is further likely to increase to 292 million tonnes during 2019-20 is remarkable. All these were possible due to various technological advancements including varietal improvement as well as dedicated and coordinated efforts of Central and State Governments, he said.

Shri Sanjay Aggarwal, Secretary (Agriculture, Cooperation and Farmers Welfare), in his concluding remarks, said that although our country has become food surplus, but still we have to accelerate the production and productivity of agriculture and horticulture sectors for ensuring food and nutritional security in the rural areas. He apprised the participants about major new initiatives taken by the Ministry for increasing production of crops and income of the farmers like intensification of “Per Drop More Crop” under flagship Pradhan Mantri Krishi Sinchayee Yojana (PMKSY) by promotion of drip and sprinkler irrigation systems for improving water and fertilizer use efficiency, Paramparagat Krishi Vikas Yojana (PKVY), revised farmer friendly “Pradhan Mantri Fasal Bima Yojana (PMFBY)”, e-NAM initiative to provide farmers an electronic online trading platform, intensification of Pradhan Mantri Kisan Samman Nidhi (PM-KISAN) Yojana, introduction of Central Sector Scheme of Pradhan Mantri Kisan Pension Yojana (PM-KPY), launching of PM-AASHA scheme to ensure MSP to farmers for oilseeds, pulses and crops, and Minimum Support Price (MSP) at a level of at least 2 times the cost of production along with various provisions for Direct Marketing in view of COVID-19 and advisory/Guidelines for agriculture management in the event of lockdown to ensure better economic return to the farmers.

Making a detailed presentation on the strategies for crop management in Kharif season especially during the pandemic lockdown, Dr. S. K. Malhotra, Agriculture Commissioner said that cultivable/agriculture land has reduced by about 2.74 million hectare during the last two decades (1988-89 to 2018-19). However, during the same period the gross cropped area has increased from 182.28 million hectare to 196.50 million hectare, with net area sown remaining largely unchanged at 140 million hectare. He further cited that production of foodgrains has increased from 169.92 million tonnes to 284.96 million tonnes in the corresponding period due to various technological and policy interventions.

As regards the Rabi crops, it has been decided that all States will ensure procurement at Village/Block levels as farmers are not allowed to move out of block due lockdown position. In addition, all States are taking steps for Direct Marketing/purchasing of crop produce from farmers.

Advisory/Guidelines have been issued to the all States and relaxation given for movement of trucks/ vehicles loaded with seeds and fertilizers to ensure timely availability of such inputs at Village/Block levels across the country. Government has also strengthened the e-NAM system to provide farmers an electronic online trading platform and better economic return to the farmers.

Despite several efforts in past decades, large agriculture area is still dependent on the monsoons and in the event of failure of monsoons, farmers have been facing hardship for survival of their crops. In view to resolve these problems “Prime Minister Krishi Sinchayee Yojana” (PMKSY) is being implemented with aim to expanding cultivable area under assured irrigation, improve on-farm water use efficiency to reduce wastage of water, enhance the adoption of precision-irrigation and other water saving technologies.

The format of State Action Plan (SAP) for advance planning and implementation of the National Food & Nutritional Security Mission (NF&NSM) has been simplified and reduced to about one page, so that States can get the SAPs prepared and submit the same to GoI after approval of competent authority with bare minimum efforts. NF&NSM is mainly a mandate for production of foodgrains and is implemented on projectised mode through State Agriculture Departments across the country.

Once SAPs are received, the same will be examined in a week’s time and approval will be conveyed to implementing agencies. Project Monitoring Team exists at Central and State levels for guiding in formulation of SAPs and also for monitoring through field visit and farmers’ interaction. Geo-tagging of various interventions are also undertaken to ensure transparency in the programme implementation.

Special Secretaries, Additional Secretary (Agriculture) and senior officers from DAC&FW, ICAR and officers of different State Governments participated in the National Conference through video conferencing. An interaction session was also organized with Agriculture Production Commissioners and Principal Secretaries of all the States in five groups to share the achievement, challenges and strategies to be adopted in respective states for increasing area coverage, production and productivity during Kharif season in agriculture sectors.