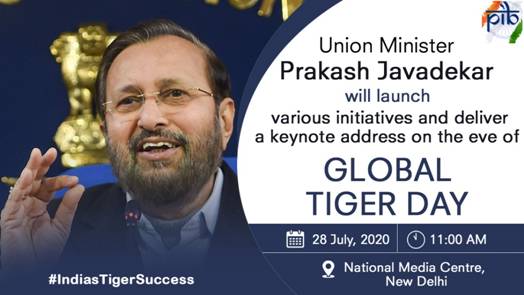 New Delhi: On the eve of Global Tiger Day,2020, Union Environment Minister, Shri Prakash Javadekar will be dedicating to the people of India, the Guinness world record recognizing the country’s efforts in monitoring its wild tiger population as the world’s largest camera trap survey of wildlife.

The event will be held at National Media Centre, New Delhi and will be live streamed at the following link https://youtu.be/526Dn0T9P3E from 11 AM on 28th July. The event is expected to be joined by around 500 participants from across the country.

EuroSchool partners with Jonty Rhodes on a journey to build…

The Heads of the Governments of Tiger Range countries at St. Petersburg, Russia, had resolved to double tiger numbers across their global range by 2022 by signing the St. Petersburg declaration on tiger conservation. During the said meeting it was also decided to celebrate July 29 as Global Tiger Day across the world, which is since, being celebrated to spread and generate awareness on tiger conservation.

It was during this day last year, when the Prime Minister Shri Narendra Modi declared to the world India’s fulfilment of its resolve to double tiger numbers, four years in advance to the target year of 2022 as decided during the St. Petersburg declaration on tiger conservation in Russia in 2010. India now has nearly 70% of the global tiger population.

The Environment Minister is likely to launch the new website and also release the Outreach Journal of the National Tiger Conservation Authority among other things. The event can be watched live at the following link https://youtu.be/526Dn0T9P3E .

EuroSchool partners with Jonty Rhodes on a journey to build ‘Champion…

A Nobel Initiative by H. R. College to get Students and Faculty Vaccinated