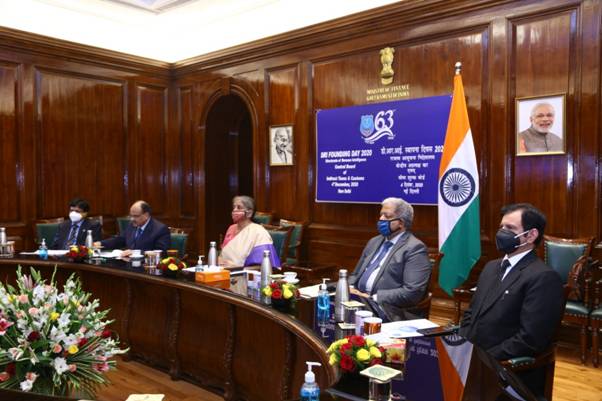 New Delhi: Union Minister of Finance & Corporate Affairs Smt. Nirmala Sitharaman here today observed the 63rd Founding Day of the Directorate of Revenue Intelligence (DRI), the apex anti-smuggling intelligence and investigation agency functioning under the aegis of the Central Board of Indirect Taxes and Customs (CBIC).

The celebration commenced with an Inaugural Function held at the Ministry of Finance, North Block in the presence of the Union Finance Minister along with Finance Secretary Dr. Ajay Bhushan Pandey, CBIC Chairman Shri M. Ajit Kumar and DRI Pr. Director General Shri Balesh Kumar.In view of the COVID-19 pandemic, this yearthe event was also streamed live through a digital platform with participation of over 450 DRI, CBIC and other Government of India officers across the world.

The Finance Minister congratulated DRI and its officers on their performance and commendable service, especially in times of the prevalent pandemic. Smt. Sitharaman also lauded DRI’s 800 officer strong ‘lean and mean force’ for their relentless efforts despite imminent risks.The Finance Minister encouraged the officers of DRI to continue working hard as the cases booked and arrests affected by DRI, while large, are just the tip of the iceberg and urged DRI and Indian Customs to ensure that every offender of India’s economic frontiers is taken to task.

Smt. Sitharamanalso acknowledged the role of World Customs Organisation in anchoring the sharing of actionable inputs between Customs enforcement agencies across the world and highlighted the need for ramping up such mutually beneficial exchanges of intelligence.

The function was also attended by Secretary General of the World CustomsOrganisation, Dr Kunio Mikuriya who addressed the gathering on“Customs Response to the COVID-19 pandemic”.

Finance Secretary Dr Ajay Bhushan Pandey said that DRI has contributed to the economic and physical economy of India by actively bringing to light some significant cases of commercial frauds and cross-border smuggling. He emphasised on data analysis, intelligence/information/data sharing between the agencies for effective enforcement of laws.Dr Pandey said that DRI has acquired a position of eminence amongst the other law enforcement agencies.

On this occasion, Bravery Awards were conferred upon ShriNajimudheen T S of DRI Cochin Zonal Unit and Shri Sumer Sen, an independent witness of a case booked by DRI, Jaipur.

The DRI UtkrishtSevaSamman, 2020 was awarded to Shri B. Sankaran, an officer of the 1961 batch of the Indian Revenue Service (Customs & Central Excise) for his years of distinguished and committed service. Due to travel restrictions, this year the Bravery Award and the Utkrisht Seva Samman were conferred upon the recipients by the Principal Additional Director Generals of DRI’s Zonal Unit earlier this morning, on behalf of the Finance Minister. During the function, video recordings of these ceremonies were played before the attending officials.

The inaugural session was followed by an International panel discussion moderated by the DRI. The panellists included representatives from Australian Border Force, Customs Administration of Netherlands, HM Revenue & Customs (UK) and INTERPOL. The panel discussion was attended by over 200 participants.