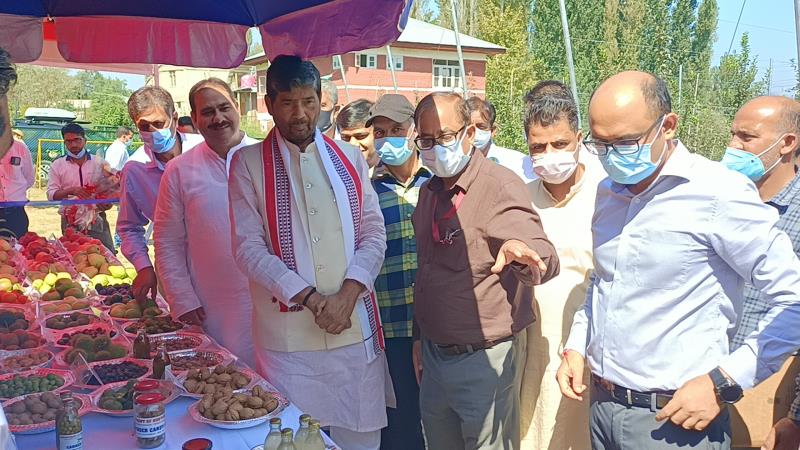 At the outset of his visit, the Minister inaugurated the stalls installed by horticulture and other related departments. These stalls, apart from presenting sponsored schemes and programmes displayed different fruit varieties that are locally grown in the region.

The Minister also interacted with some progressive fruit growers of Pattan area during which they shared their feedback and farming experiences with the minister.

The Minister urged them to adopt latest and scientific methodologies in their fields adding that such interventions have the ability to leverage the production as well as productivity. He said that food processing sector has immense potential and there is a need of value addition of horticultural products so as to yield better and enhanced dividends. Moreover, he reiterated that Union Government is committed to ensure the welfare of farmers besides doubling their income.

The fruit growers also raised some vital issues and demands which include establishment of cold storage facility, continuation of Market Intervention Scheme (MIS), hassle free movement of vehicles on national highway that are carrying fruits to different markets among other grievances of vital public significance.

The Minister gave a patient hearing and assured that all the genuine grievances shall be taken with the concerned authorities for their timely redressal. He said that the current outreach programme aims to listen to the public’s demands at grass root level so that a common man avail benefits of different welfare schemes and programmes.

He also inspected some high density orchards in order to get the first hand appraisal of various horticulture related aspects.

The Minister also distributed authorization letters to farmers who have been authorised to purchase the highly subsidized farming machineries under Prime Minister’s Development Programme.