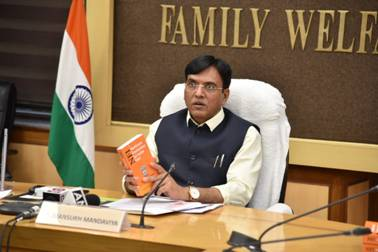 New Delhi: Union Minister for Health and Family Welfare Dr. Mansukh Mandaviya today launched the Sixth Edition of National Formulary of India (NFI). NFI has been published by Indian Pharmacopoeia Commission (IPC) to promote rational use of medicines in the country.

Speaking at the event, Dr. Mandaviya congratulated IPC for coming up with the new edition of NFI. He appreciated the efforts of all the experts, doctors and researchers who contributed in the compilation of new edition. He said that NFI, 2021 would act a guidance document for all the healthcare professionals such as clinicians, pharmacists, nurses, dentists etc. It will play a crucial role in daily clinical practices.

He said that medicines behave differently in different bodies. It is important to know about the content, impact and side effects of medicines. The NFI is published to promote rational use of medicines in the country. It will be very beneficial for Clinicians and Healthcare professionals while prescribing the medicines to the patients.

The 6th Edition of NFI 2021 has been drafted by adopting the principle ‘do not miss critical and do not overload’ the information by revising the appendices, chapters and drug monographs. The chapters such as Analgesics, Antipyretics and Anti-inflammatory drugs, Antiepileptics, Antacids and Antiulcer Drugs, Antiallergics and Drugs Used in Anaphylaxis, Antidiarrhoeals and Laxatives, Antidotes and Substances Used in Poisoning, Antimigraine drugs, Basics of Medical Emergencies, Dermatological Drugs, Disease Modifying Anti-Rheumatic Drugs (DMARDs) and Drugs for Gout, Diuretics, Drugs in Osteoporosis, Drugs for Inflammatory Bowel Disease, Drugs for Respiratory Diseases, Ophthalmological Preparations and Psychotherapeutics Drugs were revised thoroughly by involving the subject specific experts/specialist in the country.

The salient feature of this edition includes:

34 therapeutic categories chapters including 591 drug monographs and 23 appendices are included in this edition.
The NFI is aligned with National Health Programmes and National List of Essential Medicines (NLEM).
Important Weblinks related to NLEM, Drugs banned in India, NHP, Drugs banned in sports, Immunization schedule, wherever necessary are provided for information to readers.
Special note on “How to use NFI?” and Salient Features of NFI are added in this edition.
Only indications approved by the Indian drug regulator (CDSCO), clinically relevant and as per standard care are included
the term ‘availability’ is now replaced with ‘dosage forms and usual strength’
Only the clinically relevant precautions and contraindications are included
the common or the serious and clinically relevant adverse effects are included
Storage conditions for medicines are included for special cases only
Chapter on Medicines banned in sports in previous edition has been considered under appendices in this edition
Considering the prevalence of diabetes in the country a separate Chapter on Management of Diabetes is included after revising completely
New appendix on Good Distribution Practices is incorporated
Appendix on National Immunization Schedule and IAP Immunization Schedule is revised as per current schedule.
Senior officers of Ministry of Health and Family Welfare and IPC were present at the occasion.