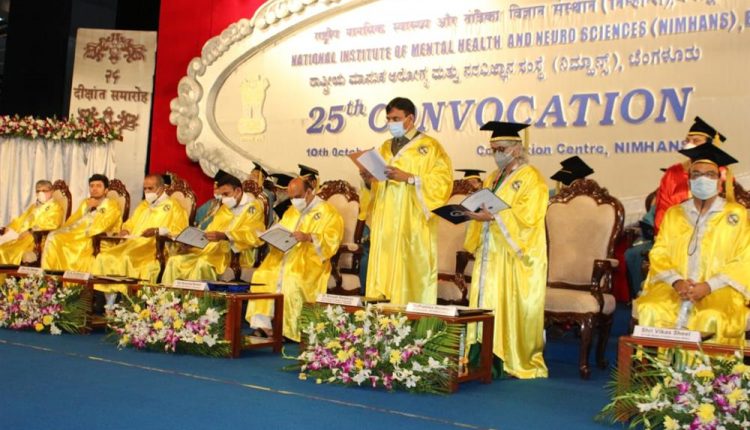 New Delhi: Union Health Minister Shri Mansukh Mandaviya presides over the 25th Convocation of National Institute of Mental Health & Neuro Sciences (NIMHANS) held today at Bengaluru. The Chief Minister of Karnataka, Shri B. S. Bommai was the Chief Guest at the event attended by other eminent dignitaries. As many as 227 postgraduates received various degrees and certificates; and 13 were honored with meritorious awards at the convocation ceremony. Delivering the presidential address at the Silver jubilee convocation the Union Health Minister said that the doctors of today have a very significant role in the making of New India and that true Commitment and dedication can make this possible.

To commemorate the silver jubilee event, various new facilities at NIMHANS were inaugurated by the Union Minister for Health & Family Welfare, Government of India. The world’s most advanced and accurate cranial radiosurgery system, the Gamma Knife Icon, was dedicated to the nation. The Department of Integrative Medicine, which combines traditional Indian healthcare approach with evidence-based modern biomedicine system & Nurses’ Hostel was also inaugurated on the occasion.

Earlier in the day, the Union Minister for Health & Family Welfare, Chemical & Fertilizers, Shri Mansukh Mandaviya, also inaugurated the 90 bedded Modular COVID field Hospital, at Bengaluru. Present at the occasion was Chief Minister of Karnataka, Shri B.S Bommai and State Health Minister Shri K. Sudhakar among other dignitaries. The 90 bedded modular COVID Field hospital was established in collaboration with Texas Instruments, Nokia, Swasti, Viatris in record time of 26 days, as part of their CSR initiatives. Speaking at the event the union health minister congratulated the state for excellent vaccination campaign under the leadership of the CM. The union minister further felicitated the key persons behind the CSR initiative.

The union Health Minister also attended the Pradhan Mantri Bhartiya Janaushadhi Pariyojana’s Azadi Ka Amrit Mahotsav programme in Karnataka & distributed free first aid kits to senior citizens on the occasion. Speaking at the event he said that PMBJP was scaling new heights with 8,300+ stores across the country, providing quality medicines at affordable prices to all and the Generic Medicines usage had increased from 2% to 10% in the country.