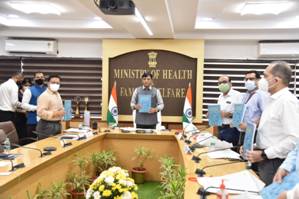 New Delhi: Representing India at the Major Economies Forum on Energy and Climate (MEF) convened virtually by US President, Joe Biden, on September 17, 2021, the Minister for Environment, Forest and Climate Change, Shri Bhupender Yadavstated that combating climate change is a shared global challenge and our response must be based on the fundamental principles of equity and common but differentiated responsibilities and respective capabilities

The Minister in his remarks mentioned that though India’sshare of world population is 17% but the country’sshare in cumulative historical emissions is just 4% and even the current annual emissions are only 5.2% of the global emissions and the per capita emissions are about a third of the global average. “It is clear that we are not a part of the problem, but we want to be a part of the solution to the climate crisis.” emphasised the Minister at the meeting which aimed at facilitating candid dialogue among major emitters countries, both developed and developing, to garner political leadership to advance climate action.

Expressing India’s ambitious goals under the Paris Agreement, the Environment Minister highlighted India’s target of 450 GW of Renewable Energy by 2030 and mentioned that India’s solar capacity, drawing on the collaborative spirit of member countries through the International Solar Alliance, has increased fifteen times in the last six years.

The Minister of Environment concluded his remarks by echoing global sentiments for collective intent and concrete actions in tackling climate change. “The world needs rapid, sustained, and deep emission cuts in this decade rather than distant targets” said Shri Bhupender Yadav underscoring collaborative and cohesive global efforts to keep the Paris Agreement temperature goal within reach.

The virtual meeting built on the Leaders’ Summit on Climate conducted in April 2021 and was aimed at enabling dialogue and discussion and building consensus before COP26, which will set a precedent for climate efforts in the years to come.

Shri Mandaviya also felicitated the States and UTs for their performance in implementation of National Quality Assurance Standards (NQAS) and LaQshya during the function. The following States/UTs were awarded:

The following States/UTs were awarded under the LaQshya scheme

Commending the awardees, the Union Health Minister said that quality is journey and it’s not a one-time activity, but it should be integrated in our day-to-day practices: “It should become a habit.  Ensuring safety of patients is a continuation of the ancient healthcare practice. Sushruta’s Charaka Samhita mentions many medical instruments which are used even today with minimal modifications.” He added that these showed the dedication of our ancestors in preserving each and every life.

Shri Mandaviya requested all institution managers to make the processes patient-centric. He said “The behaviour of healthcare workers towards patients is also an essential part of the treatment”.

He further observed that schemes like NQAS &LaQshya, Kayakalp, MeraAspataal have played a pivotal role in reinstating and reconfirming trust and confidence of the community in public health facilities. He hoped that the zest and zeal shown by the States/UTs and their collective efforts in improving Quality of Care would continue unabated.

Detailing statistics of childbirth in India and the world, Dr. Bharati Pravin Pawar spoke on the need to end all preventable maternal deaths due to morbidities like anaemia, hypertension, sepsis, etc. Drawing from her own experience while practicing medicine, she observed that birthing a child in undignified settings can be a source of emotional trauma. The right of every woman to have a respectful childbirth was stressed upon. Noting the contribution of LaQshya scheme in providing intra partum and post-partum care, she stated that MusQan would similarly facilitate healthcare of infants and children below 12 years to the satisfaction of their parents. She quoted the Ramayana, “Janani JanmabhumishchaSwargadapiGariyasi” to emphasize the importance to be given to the institution of motherhood in Indian Culture.