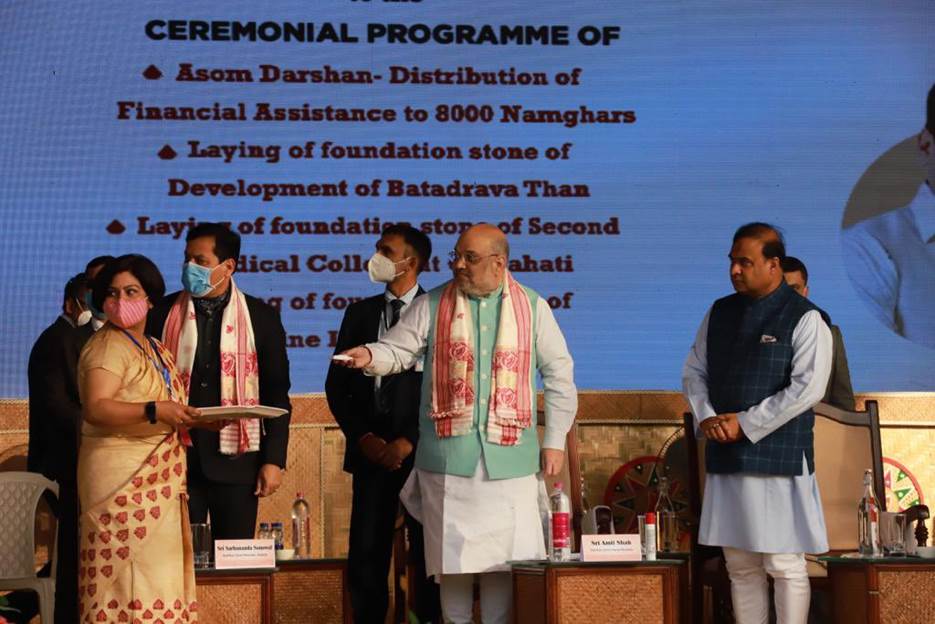 New Delhi: The Union Home Minister Shri Amit Shah today launched several development projects in Assam. Shri Amit Shah laid the foundation stone of New Medical College in Guwahati. To be built at a cost of around Rs 850 crore, this will be the second medical college in Guwahati city. Shri Shah also laid the foundation stone of nine law colleges to be built in different parts of Assam. He also distributed financial grants to 8,000 Namghars (traditional Vaisnavite monasteries of Assam) under the Assam Darshan programme. Chief Minister of Assam, Shri Sarbananda Sonowal and his cabinet colleagues were also present on the occasion.

In his address, Shri Amit Shah said that Assam, which was once infamous for its arms and unrest, is today on the path of development led by the Prime Minister of the nation, Shri Narendra Modi. In eastern India, there were different types of movements and violence. Different groups were seen with arms in hand, today they are all associated with the mainstream and all those youth who were once agitating have joined the development process of Assam and are now working day and night to make Assam the growth engine of India. The Union Home Minister said that under the leadership of Prime Minister Shri Narendra Modi, several efforts have been made for peace including the Bangladesh Agreement and Bru-Reang Agreement. Shri Narendra Modi has also struck an agreement with the Bodoland groups paving the way for resolving the longstanding movement. Shri Amit Shah said that I want to congratulate all the Bodo groups and people because they have entered into an agreement by trusting in the leadership of Modi ji. Shri Shah said that NDA’s resounding victory in the recent Bodoland Territorial Council (BTC) election symbolizes this faith. The Union Home Minister said that elections will be held in Assam soon, extremists will soon resurface, approach people with masks on their faces and deceptive appearances and they will mislead the people. Today, I have come to ask them what did you give to Assam by agitating? You have only served to kill the youth of Assam.

Shri Amit Shah said that the culture of Assam is the jewel of the country. Assam is a state with a fondness for culture, language and music. Bhupen Hazarika is known across India as a symbol of literature and art of not only Assam but the entire North-East. But Bhupen ji did not get any respect. Narendra Modi Ji gave Bhupen ji the Bharat Ratna that contributed to advancing our literature and art. He said that the Modi government always believes in emphasizing the identity, culture, language and arts of the states because we believe that until the culture and languages ​​of the states are not empowered, India can never achieve greatness. Without Assamese literature and art, the literature and art of India is incomplete.

Shri Amit Shah said that Prime Minister Shri Narendra Modi has always accorded priority to the development of the North-East. A sum of Rs. 8000 crore towards gas royalty due to the Government of Assam was pending for years. Former Prime Minister Shri Manmohan Singh himself was an MP from here for 18 years but could not solve the issue of royalty. Modi ji did a lot of work for the development of Assam by resolving the issue of royalty even before the present Assam government was formed. The Union Home Minister said that Modi ji himself has visited the Northeast 30 times within 6 years and on each visit he gave the people a gift. Whether it is Arunachal or Assam, there has been an unprecedented success in ensuring the development of all states, linking the entire North-East with roads, railways, improving air connectivity and creating growth avenues for youth.

Shri Amit Shah said that I congratulate the Government of Assam for protecting the Rhinoceros, which is the pride of Assam. In the past, poachers were bent upon destroying the pride of Assam encouraged by state patronage. Today, the Assam government, working hard, has freed Kaziranga of encroachers.