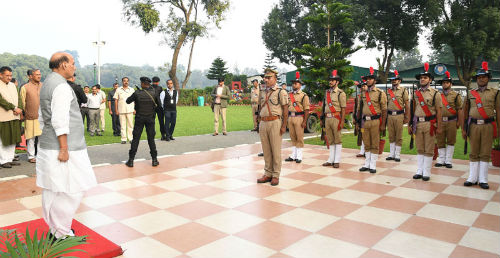 Mussoorie: The Union Home Minister Shri Rajnath Singh has exhorted young IAS probationers to help realise the Prime Minister’s dream of a New India. Addressing the Officers Trainees of 92nd Foundation Course at the Lal Bahadur Shastri National Academy of Administration (LBSNAA), Mussoorie in Uttarakhand today, Shri Rajnath Singh said, “You need to work hard to help the people. You have to create a sense of confidence among the people with your hard work.”

Noting that God has given them an opportunity to serve humanity and common citizens of the country, the Union Home Minister said the Officers should empathise with the citizens who come out with their problems. “You should not try to postpone the resolution of their problems,” he said, adding, “Your approach should never be individual centric. Always be system centric.”

Cautioning the young IAS Officers against harbouring egos, Shri Rajnath Singh said, “Ego is like a decimal point which if added before a number reduces the value of that number.” He also inspired them to remain committed to high moral values and become role models. “You will become role model for others only when you adhere to high moral values. You should always be cautious in public life,” he said, wishing the probationers a bright future and successful career.

The Union Home Minister will visit the Mana Border Out Post (BOP) of Indo-Tibetan Border Police (ITBP) later today. During his four-day visit, Shri Rajnath Singh will also visit the Lapthal and Rimkhim Border BOPs of ITBP and witness Rock Climbing and Commando Storming Operations at ITBP’s Mountaineering and Skiing Institute, Auli. He will also inaugurate the Civic Action Programme and Blood Donation Camp at Joshimath.

Yesterday, Shri Rajnath Singh was received by Chief Minister of Uttarakhand, Shri Trivendra Singh Rawat as he arrived in Dehra Dun on a four-day visit to the state. The two leaders later held talks on various issues.