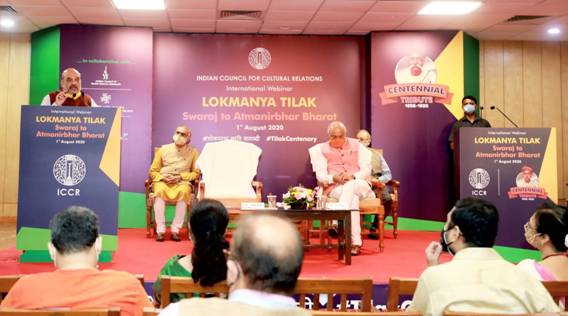 In his address Shri Amit Shah said that Lokmanya Bal Gangadhar Tilak played a key role in the making of the Indian Independence movement complete in letter and spirit. Tilak made an unparalleled contribution to the freedom movement, he dedicated every moment of his life to the nation and created an ideological generation of revolutionaries.

The Union Home Minister said that the slogan of ‘Swaraj is my birthright and I shall have it’ given by Lokmanya Tilak, will always be written in golden letters in the history of the Indian Independence Movement. Shri Amit Shah said that this slogan may seem natural to utter in our times, but in the 19th century very few people could have dared of uttering it and sacrificing their life and working for it to make it turn into reality. This slogan of Tilak served to awaken Indian society and convert the freedom movement into a mass movement, due to which he came to be known as Lokmanya Tilak. The Union Home Minister said that before Lokmanya Tilak ji, people knew the ‘Asceticism’ of ‘Gita’, but while in jail, Tilak ji wrote ‘Gita Rahasya’ and worked to bring ‘Karmayog’ in the Gita before the people. Tilak’s ‘Geeta Rahasya’ is still a guiding post for people.

The Union Home Minister also mentioned that, despite being an eloquent orator, thinker, philosopher, established writer and social reformer, Tilak was rooted to the ground.

Shri Amit Shah further added that Tilak’s idea of India as a nation, Indian culture and Indian customs are equally relevant today. Appealing to the youth, the Union Home Minister said that if one wants to know the glorious history of India and Indian culture, then Bal Gangadhar Tilak’s writings will have to be understood. He also advised the youth that reading his literary works will give them new knowledge about the great personality of Tilak and by taking inspiration from him, the youth will be able to attain new heights in their lives. Shri Amit Shah said that Lokmanya Tilak’s belief in Indian language and Indian culture is reflected in the New Education Policy of the government of Prime Minister Narendra Modi. Tilak’s ideas are being promoted through Prime Minister Shri Narendra Modi’s vision of a New India and Atmanirbhar Bharat.

Shri Amit Shah referred to Lokmanya Tilak’s famous quote that the foundation of true nationhood is laid on the foundations of our culture and traditions. Any reform which undermines or disrespects our past cannot help in realizing true nationhood. The Union Home Minister emphasized that in the name of social and political reform we cannot afford to adopt British Models for our institutions. Shri Amit Shah added that Bal Gangadhar Tilak wanted to inculcate love for the nation amongst the people on the basis of pride for Indian culture. In this context, he set up gymnasiums, arenas, anti-cow slaughter institutions

Shri Amit Shah also said that Lokmanya Tilak was a strong opponent of untouchability, he launched a movement to unite society divided in caste and sects. Tilak said that if God accepts untouchability, then I would not accept such a God.

The Union Home Minister referred to Tilak’s important work to connect the working class to the national movement. At the same time, Lokmanya Tilak started celebrating Shivaji Jayanti and Ganesh Utsav to connect the people with the freedom movement, which changed the direction of the Indian Independence movement.

Shri Amit Shah said that there is a difference of half a letter between “मरण” and “स्मरण”, but to add this half ‘स’ one has to sacrifice one’s life and Tilak ji is the best example of this. Lokmanya Tilak worked to encourage many freedom fighters including Gandhi, Veer Savarkar and Madan Mohan Malviya.

The famous social reformer, Lokshahir Anna Bhau Sathe ji was also paid floral tributes at the event on the occasion of his Centenary. The inaugural session of the webinar was attended by several dignitaries including the President of the Indian Council for Cultural Relations and Member of Parliament Dr. Vinay Sahasrabuddhe, Mr. Deepak Tilak, Vice Chancellor of Tilak Maharashtra Vidyapeeth and Dr. Sharad Kunte, President of Deccan Education Society.

India Education Diary Bureau Admin Aug 1, 2021
New Delhi: A ‘Samajik Adhikarita Shivir’ for distribution of aids and assistive devices to ‘Divyangjan’ under the…