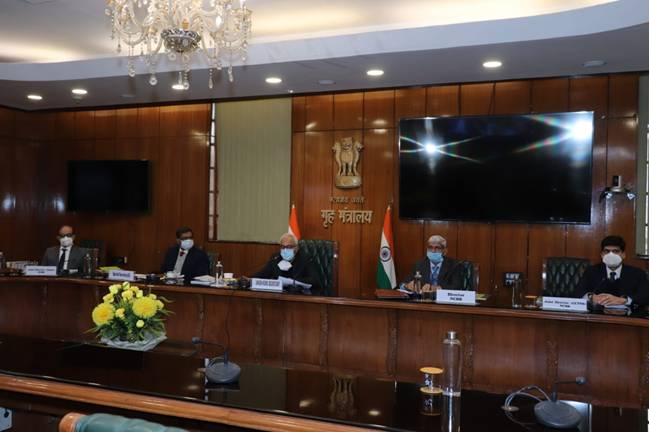 New Delhi: Addressing the Valedictory session of the 2nd Conference on ‘Good Practices in Crime and Criminal Tracking Network & Systems (CCTNS)/ Interoperable Criminal Justice System (ICJS) through video Conferencing today, Union Home Secretary Shri Ajay Kumar Bhalla said it is satisfying to note that ICJS components such as eForensics, eProsecutions & ePrisons, have all been expanded manifold and many more databases integrated with the System.

Welcoming the Union Home Secretary and other senior officers present in the session Director NCRB Shri Ram Phal Pawar said the Conference has been organized to provide a platform to all States/UTs to showcase their innovations and achievements with regard to CCTNS/ICJS that can be replicated by other States/UTs.

He added that in order to recognize the continuous efforts made by States/UTs in the implementation of CCTNS and ICJS projects, top ranking States/UTs were awarded during the inaugural function of the Conference yesterday by the Union Minister of State for Home Affairs, Shri G. Kishan Reddy.

Shri Ram Phal Pawar also mentioned that UNIFY webApp has been released on digitalpolice.gov.in platform. This webApp can be used to identify a suspect or unidentified person by comparing his/her photo against the missing persons or offenders data base in CCTNS which shows NCRB commitment to realize the goal of having Tech-savvy police under ‘SMART’ acronym.

Apart from Union Home Secretary, other senior officials from the Union Ministry of Home Affairs and senior Police officers from States/UTs and CCTNS/ICJS Nodal Officers were also present in the session.

Maintenance allowance of Rs 20,000 to be released under Prime Minister’s Special Scholarship Scheme (PMSSS) by AICTE

iednewsdesk Jan 23, 2022
Western attitudes towards aging, physical and social impediments and impacts of the coronavirus pandemic are some…