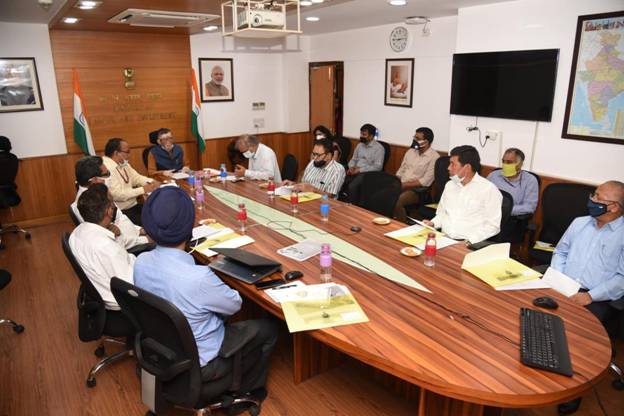 New Delhi: Santosh Kumar Gangwar, Minister of State (Independent Charge) for Labour & Employment addressed the first meeting of the Expert Group on Labour Bureau surveys held on 08.10.2020 at the Ministry of Labour & Employment, New Delhi. The expert group chaired by Prof S.P. Mukherjee, Emeritus Professor, University of Kolkata consists of eminent economists, statisticians and Government functionaries. It has been constituted by the Government for a period of three years for providing technical guidance to Labour Bureau with respect to surveys on migration, professional bodies, domestic workers and other surveys.

On the occasion, the Minister stated that the Government in an endeavour to understand the issues concerning special segments of labour has entrusted Labour Bureau with the task of conducting three ambitious surveys.

While expressing deep concern over the difficulties faced by migrant workers in these pandemic times, he called upon the need for having reliable data on these workers and the issues being faced by them especially in the wake of COVID-19 pandemic. The database will enable the Government to devise pragmatic solutions to improve their conditions and plan employment opportunities for them. The migration survey to be undertaken by Labour Bureau will provide authentic estimates of the number of migrant workers in the country along with an assessment of the issues being faced by them. Given the urgent need of this data, he urged the expert group to finalise all the technical details related to this survey at the earliest so that the same can be launched without any delay.

He also informed that to collect data on domestic workers, which constitute roughly 3% of the workers in our country, a first of its kind survey on domestic workers will also be carried out by Labour Bureau. The survey will further enable Government to identify the issues being faced by this section and devise policies to improve their conditions.

The Minister stated that to effectively augment our available sources of data on employment and unemployment, the Government has launched a Professional Bodies survey which will be undertaken by Labour Bureau. Given the high proportion of employment generated in professions like charted accountants, lawyers, and doctors, there’s a need to undertake a periodic estimation of the employment created in such professions. The survey aims at generating reliable and frequent database on employment which will serve as an input in overall employment planning and promotion.

Labour Bureau, the organisation which is going to conduct these surveys, was established in 1920 and has a rich legacy of producing quality labour statistics since last 100 years. It is highly acclaimed at national and international level for its price indices, administrative statistics and labour related surveys data. Labour Bureau brings out CPI-IW index on monthly basis which is used for regulation of Dearness Allowance and wages of millions of workers and employees belonging to Central and State Governments in the Country. It also compiles other useful indices like CPI-AL/RL and Retail Price Index and conducts various surveys related to different aspects of labour. The Bureau will also be empowered under the rules to be the custodian of the data generated by way of returns under the four new labour codes that have been approved by the Parliament.

Ignitho Opens Development Center in Chennai; Plans to Ramp Up Team to 150 in Coming…