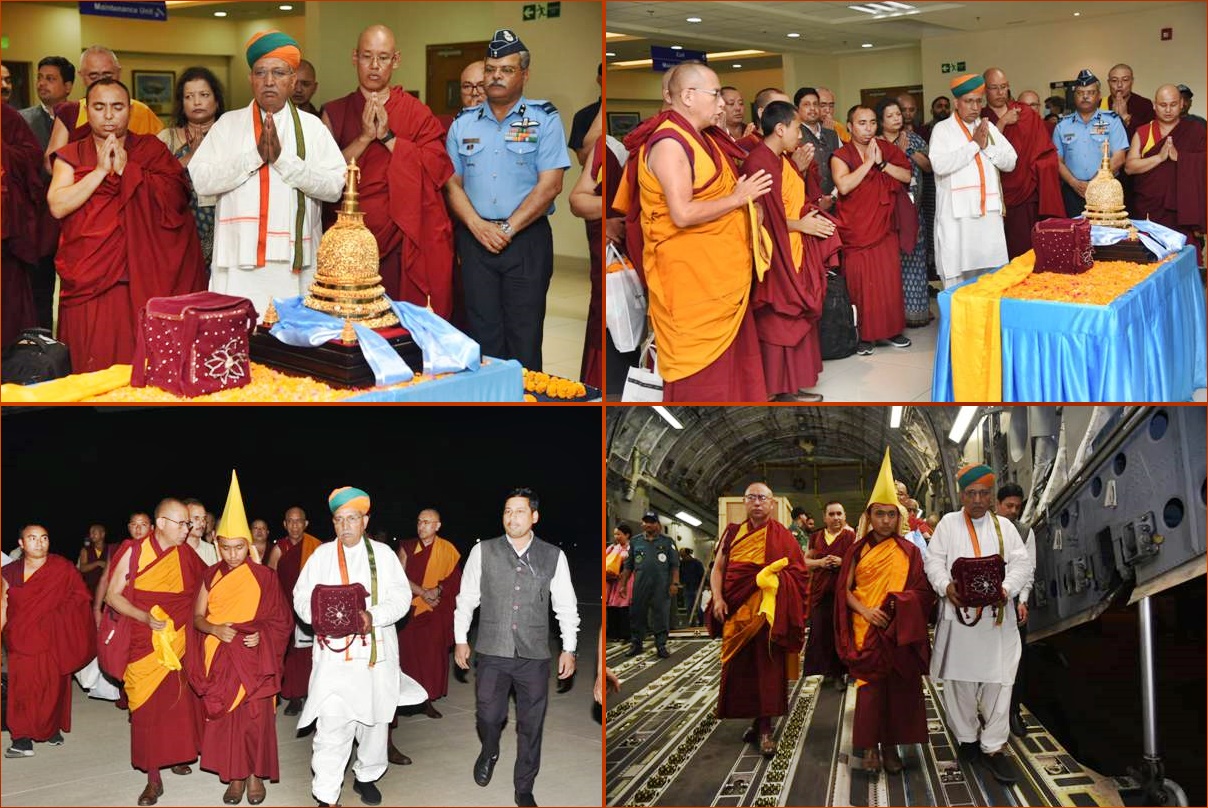 New Delhi: The four Holy Relics of Lord Buddha came back to India after being displayed for 12 days at the Batsagaan Temple within the premises of Gandan Monastery, Mongolia as part of celebrations of Mongolian Buddh Purnima. Union minister Arjun Meghwal received the holy relics at Ghaziabad today.

The duration of display of Holy relics had to be extended by a few days on popular demand from Mongolian people.

The President of Mongolia, Speaker of Parliament of Mongolia, Mongolia’s Foreign Minister, Culture Minister, Tourism Minister, Energy Minister, more than 20 MPs, High Abbots from over 100 Monasteries from Mongolia were among the thousands who paid their respects to the revered relics during 12-day exposition at the Gandan Monastery. On the concluding day the Interior Minister of Culture of Mongolia was present for the rituals.

On day 1 (June 14) of the exposition about 18-20 thousand devotees paid their obeisance to the Holy Buddha Relics.

On the last day about 18 thousand devotees visited Gandan to pay their respects to the holy relics. On the concluding day the Interior Minister of Culture was present for the rituals.

The Holy Buddha Relics, are known as the ‘Kapilvastu Relics’ since they are from a site in Bihar first discovered in 1898 which is believed to be the ancient city of Kapilvastu.

The Relics were accorded the status of a State Guest and were kept in the same climate control case as it has been kept presently at the National Museum. A special airplane C-17 Globe Master carried the holy relics back to India

In a first ever visit by an Indian Prime Minister to Mongolia, in 2015 Prime Minister Narendra Modi visited Gandan Monastery and also presented a Bodhi Tree Sapling to Hamba Lama.

Pointing out the centuries old Buddhist ties between the two countries, Shri Narendra Modi defined India and Mongolia as Spiritual Neighbours during his address to the Mongolian Parliament.

The last time these relics were taken out of the country was in 2012 when their exposition was held in Sri Lanka and were on display at several locations across the island nation.

However, later guidelines were issued and the Holy Relics were placed under the ‘AA’ category of those Antiquities and Art Treasures which should not be ordinarily taken out of the country for exhibition, considering their delicate nature.