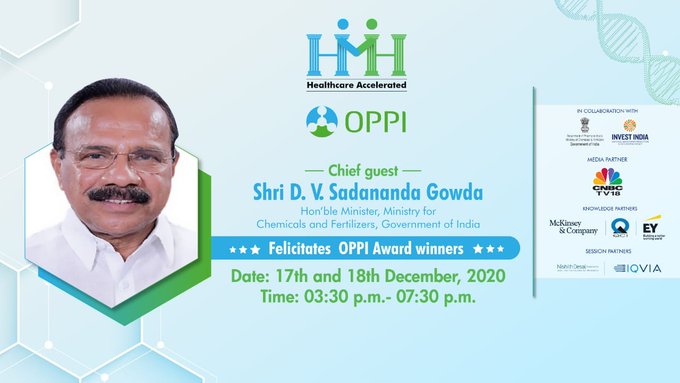 New Delhi: The Union Minister for Chemicals and Fertilizers Shri D.V. Sadananda Gowda inaugurated the two-day Annual Summit of the Organisation of Pharmaceutical Producers of India (OPPI) here today. The Minister Conferred the lifetime achievement and Special Recognition awards during the summit.

While addressing the summit Shri Gowda said that the contribution of Indian pharmaceutical sector has been reinforced during this pandemic year when the companies, global and Indian, stepped in and stepped up their efforts in service of the country. India is often referred to as ‘the pharmacy of the world.’ This has been proven completely true during the ongoing COVID-19 pandemic when India continued to produce and export critical life-saving medicines to the rest of the world , the minister added

He said that without being asked, every company jumped into the fray and began working in their own specialised areas to support the national efforts to control the virus, working closely with state and central government agencies. Shri Gowda said that their contribution, in different ways, was despite challenges in the supply chain during lockdown to ensure that many essential medicines and medical devices and other related items were made available in a seamless manner.

He said that with the urgent need to have a vaccine coming to haunt the countries, we have witnessed the scene of many Indian and global companies moving into the laboratories and forming collaborations.It has been a commendable effort from all constituents of the industry, global companies, Indian companies, research institutes, government regulators and the hospitals that supported in the vaccine development and the clinical trials for the vaccine development.

The Minister said that India has attracted large scale inflow of foreign direct investment to the pharmaceutical sector and the Medical Devices sector.More and more foreign companies wanted to set up their research, manufacturing and clinical trials in India.

Speaking on the export part of medicine , he said that It is a fact that rest of the world receives medicines manufactured in India, and therefore India’s export of medicines has been growing steadfast, even as the Indian domestic market has been witnessing tremendous growth.

The Union Minister said that as a matter of record, pharmaceuticals export from India was over 20 billion dollars in the year 2019-20 and is expected to cross 25 billion dollars by the end of the current financial year. This was at a time when the domestic market has crossed 22 billion dollars last year. It is indeed poised for much higher growth.

He said that Indian pharma industry has potential to emerge as global manufacturing hub. In this context, Government has taken decision to support development of three bulk drug parks and four medical device parks with world class infrastructure, pre approved regulatory clearances and centres of excellance to support R&D activities. It is important that we produce world class quality products and further strengthen our position in the Pharmaceutical Sector meeting the global quality requirements by our manufacturing facilities, he added

Emphasing that our Government is committed for providing low cost affordable health care to every citizen, he said that there are several schemes but two of them—one is Pradhan Mantri BhartiyaJanAushadhiPariyojana (PMBJP) for low cost medicines, and second one is Ayushman Bharat Yojana for cashless healthcare for poor citizens have significantly reduced out of pocket expenses on healthcare of citizens especially who are marginalized and poor.

Concluding his address the Minister said that with collaborations, research and development, we can address any health challenge in the future and turn this industry into one of the growth engines of Indian economy.