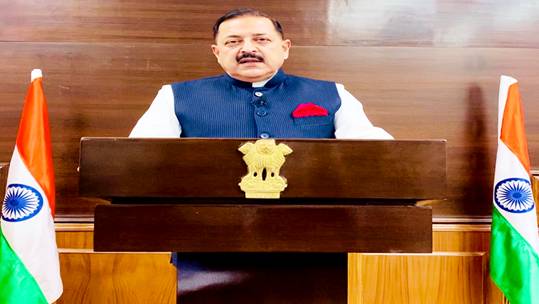 New Delhi: Union Minister of State (Independent Charge) Development of North Eastern Region (DoNER), MoS PMO, Personnel, Public Grievances, Pensions, Atomic Energy and Space, Dr. Jitendra Singh has hailed Indian Physician’s contribution to “AtmaNirbhar Bharat” and said, while COVID pandemic offered an opportunity in adversity, the Indian Medical fraternity took a lead in proving to the world that India could not only be self-reliant but could also offer reliance to other nations.

Dr Jitendra Singh had a special word of appreciation for the young physicians, particularly young Resident Doctors, who had earned the distinction of being lauded as Corona Warriors and helped India emerge victorious against all odds even when several countries with lesser populations were struggling with the challenges of pandemic. While India, under the leadership of Prime Minister Narendra Modi, was among the first in the world to come out with COVID vaccine, it is now also providing the same vaccine to other countries, he said.

Over the years, said Dr Jitendra Singh, API has come of age and many from our generation have also grown of age but, he said, he had the satisfaction to note that most of us, who had been active in API, diligently and sincerely tried our best to live up to the legacy inherited by us from the founding fathers of API who were among the iconic figures in the annals of Medicine in the post-independence India.

Referring to the theme of this year’s API conference “Engaging Minds : Empowering Medicine”, Dr. Jitendra Singh said, the theme is appropriate to the time at which this conference is being held. The Indian Physicians, he said, have taught the world the art of engaging minds without physical engagement and fighting the real virus through sometimes virtual and sometimes non-virtual means.