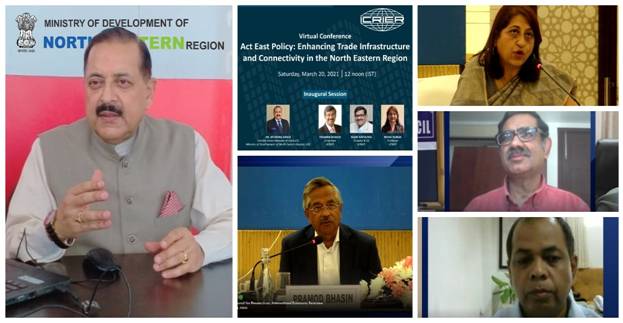 New Delhi: Union Minister of State (Independent Charge) Development of North Eastern Region (DoNER), MoS PMO, Personnel, Public Grievances, Pensions, Atomic Energy and Space, Dr Jitendra Singh said that as India prepares to celebrate 75th Year of Independence in 2022, North East will become the torch bearer of New India. Speaking as Chief Guest in a seminar titled “Act East Policy: Enhancing Trade Infrastructure and Connectivityin the North Eastern Region” organized by ICRIER, he said, North East will be the New Engine of growth for New India. He said, in the Post-COVID era, India’s Economic Resurgence will not be complete, unless it takes care of the vast unexplored potentialities and resources of the North-Eastern Region.

Dr. Jitendra Singh said, it was Prime Minister Narendra Modi who gave the vision of “Act East”, soon after assuming power in 2014, thus imparting a new push to our approach and focus to our relations with neighbouring countries, which was earlier known as Look East Policy. He said, ever since Narendra Modi took over as Prime Minister, he has accorded a special priority to the development of the North Eastern region of India. He said, this also assumes importance because if India has to successfully engage with the countries across the eastern borders, it must have a strong basis in the areas proximal to eastern borders which comprise the North Eastern States.

With its geographical position and rich natural as well as agro-climatic resources, Dr. Jitendra Singh said, access to the growing ASEAN market is essential for optimum utilization of trade and business opportunities. He recalled how on the intervention of Prime Minister Narendra Modi, the Indo-Bangladesh Agreement was successfully accomplished resulting in the exchange of enclaves thus facilitating easier and cost-effective access to Bangladesh and other regions.

Dr. Jitendra Singh said that the government’s focus on ACT EAST – with development of North East region and completion of an array of projects like grandest of bridges, improving inland water transport, airports, rail and roads networks – has changed the narrative of news emanating from NER in the past few years. He added that India’s pre-emptive response to Covid and outreach towards other nations has enhanced bonding and trust with its neighbours to rely on us in the times of crisis. Witnessing our commitment and continuous efforts towards the development of NER, ASEAN countries are now looking at strengthening trade ties with the region, he added.

In conclusion, Dr Jitendra Singh said that the ‘Act East Policy’ announced in November, 2014 is the upgrade of the “Look East Policy” which was promulgated in 1992. It aims at promoting economic cooperation, cultural ties and develop a strategic relationship with countries in do-pacific region with a proactive and pragmatic approach and thereby improving the economic development of North Eastern Region (NER) which is a gateway to South East Asia Region. The policy has been continuously evolving since early 1990s and involves intensive and continuous engagement with South East Asian countries in the field of connectivity, trade, culture, defence and people-to-people-contact at bilateral, regional and multilateral levels.

NishaTaneja, Professor at ICRIER, Indian Council for Research on International Economic Relations (ICRIER) highlighted the importance of enhancing trade infrastructure and connectivity in the North Eastern Region through a research study led by her. The Study says, “96% of North Eastern Region NER shares its borders with other countries. ICRIER has undertaken a first of its kind comprehensive on-ground study across the entire NER to assess the availability and quality of infrastructure (both hard and soft) at all 38 Land Customs Stations and Integrated Check Posts in the region.

The Webinar was joined among others by Shri PramodBhasin, Chairman, ICRIER, and Shri RajatKathuria, Director & CE, ICRIER.