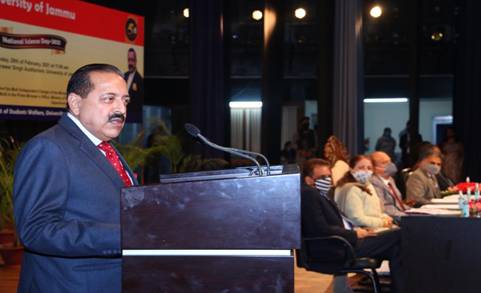 Delivering the keynote address on the occasion of ‘National Science Day’ in the University of Jammu, Dr. Jitendra Singh said that under the leadership of Prime Minister Narendra Modi, in the last few years, Government has taken some revolutionary and pragmatic decisions to give fillip to indegenous scientific innovations which will be a key to “AtmaNirbhar Bharat”. In this context, he made a special mention of the decision to “unlock” India’s Space Technology to private players for the first time after independence and the approval given by the Union Cabinet to go ahead with Joint Ventures in the field of Atomic energy and Nuclear energy in order to promote the setting up of new Nuclear installations.

The theme ‘Future of Science Technology Innovations…’ chosen for this year’s ‘National Science Day’, said Dr. Jitendra Singh, is most appropriate considering the rapid strides being made in contemporary India and being followed by other countries of the world. He cited the example of COVID vaccine which India is not only among the first countries to prepare indigenously but also to export to other countries.

Dr. Jitendra Singh said, it is a remarkable coincidence that on the morning of ‘National Science Day’ today ISRO achieved another glorious landmark by successfully launching the PSLVC51/Amazonia-1. While India began its Space journey much after several other countries, today we are in a position to provide inputs from Mangalyaan and Chandrayaan to the premier institutions of the world like the NASA of the USA, he added.

Workshop on “Unlocking Your Potential” Organized at IMS…

Dr Jitendra Singh said, it is to the credit of Prime Minister Modi that he promoted the extension of applications of Space Technology to different sectors and areas in order to bring ‘ease of living’. He said, whether it is railways or smart cities, agriculture or disaster management, highways or defence, Space technology is contributing in a big way.

In his concluding remarks, Dr Jitendra Singh said, this year’s ‘National Science Day’ is being observed at a time when India is on the verge of entering the 75th year of independence and we would be planning for the next 25 years when India celebrates 100 years of Independence. This is the period when India will be a world superpower and the journey of ascent has already started through the medium of our scientific capabilities and scientific potentials, he said.

Prof Manoj Kumar Dhar, Vice Chancellor of the University, presented a report on the recent research activities of the various Departments of the University while Prof NareshPadha spoke about the significance of the National Science Day. Prof Rajnikant presented the Vote of Thanks.

On the occasion, awards and certificates were also presented to meritorious researchers and students from different departments of the University.

Workshop on “Unlocking Your Potential” Organized at IMS Ghaziabad