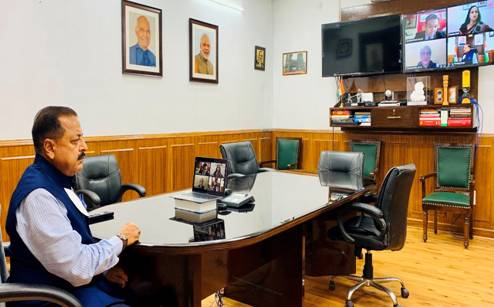 New Delhi: Union Minister Dr Jitendra Singh today said that the common man in Kashmir is tired of terrorism and is becoming increasingly aspirational for himself and for his children.

Delivering the 1st edition of “Kunwar Viyogi Annual Memorial Lecture” of the University of Jammu on the subject “Way Forward Post Abrogation of Articles 370 and 35A in Jammu and Kashmir”, Dr Jitendra Singh said that terrorism is in its last phase in Jammu & Kashmir and terrorists on the run are hitting soft targets. He said, things are changing for the better each day and hoped for a new beginning from the next season.

Dr Jitendra Singh informed that in the 2nd term of the Modi Government, the Prime Minister had called upon to give J&K similar kind of attention and focus as was given to North-East. He said, after a very long gap, there is almost equal distribution of Central resources in Jammu and Kashmir Divisions.

Referring to his speech in Parliament during abrogation of Article-370 last year, when he described it as a miscarriage of history and anomaly of the Constitution, Dr Jitendra Singh said that what was supposed to be a temporary feature remained permanent for 70 years. He said it was the vision and strong will of Prime Minister Narendra Modi that the historic wrong was undone.

He said even the prophets of doom were proved wrong that abrogation of Articles 370 and 35A would lead to bloodshed and violence. On the other hand, the UT of J&K witnessed the most peaceful festive season be it Holi, Muharram, Eid, Diwali, Republic Day or Independence Day.

Dr Jitendra Singh said that the people of the UT are realizing that in the name of special status and self-rule, it was in fact continuation of dynastic rule of three generations and autonomy was denied at the grassroots level by not holding panchayat elections. He said, panchayat elections were held under the new dispensation of LG in J&K, thus empowering the local people.

Describing the Jammu & Kashmir Domicile Rules Notification as the dawn of a new era for Jammu & Kashmir, Dr Jitendra Singh said that history will vindicate us and prove that this course correction was in keeping with the principle of equality and the norms of a healthy democracy. He said that three generations of people in Jammu & Kashmir had been denied the right to live with justice and dignity. He said, the West Pakistan Refugees and displaced persons from PoJK have been restored their legitimate rights and a discrimination of several decades has been undone.

Recalling that two Prime Ministers of India, I.K.Gujral and Dr. Manmohan Singh, came from Pakistan,Dr Jitendra Singh quipped, they would not have become Prime Ministers if they had chosen to settle in J&K because of the discriminatory law. He also added that it is an irony that All India Services Officers, including IAS and IPS, who devoted 30 to 35 years of their life to serve in Jammu & Kashmir were, at the end of the day, after superannuation, asked to pack up, leave and look for a place elsewhere to settle. This was, he said, quite in contrast to the arrangement in several States and UTs where the All India Service officers of State Cadre are not only allowed to settle but are also provided plots of land for the same. He said the same is the case for teachers, doctors and other professionals.

Dwelling on the administrative outcomes, Dr Jitendra Singh said that post 5th August,2019, Transparency, Digitization and Accountability has increased and said that the Centre is assisting the Union Territory Government of Jammu & Kashmir to establish Grievance Portal in each of the 20 districts of the UT. He said that citizen centricity in Governance has become a new norm. Similarly, several of the stalled developmental projects in the irrigation, power and other sectors have started seeing the light of the day after remaining in cold storage for more than 30-40 years, he added.

On the cultural outcome, Dr Jitendra Singh said by making Dogri an official language, another anomaly was done away with. He said that people are gradually coming out of slavish, slack and selfish mind-set, and becoming part of the new milieu.

In his address the Vice Chancellor of University of Jammu, Professor Manoj Dhar praised the Union Minister for his passion for growth and development of Jammu and Kashmir and that of Dogri Language. He informed that a full-fledged Department of Dogri is functional in the Jammu University and soon a “Centre of Excellence” will be established for promotion of Dogri language, culture and heritage.

Professor Monika Sethi, Head of Department of English under whose aegis the webinar was organized along with Ayushman Jamwal, senior editor of News18 took part in the programme.

Minister of Education, Dharmendra Pradhan will be the Chief Guest at NIT Delhi Convocation

Great Learning to host a webinar on “Cloud Computing: Applications in Healthcare and career prospects” on August 8