By India Education Diary Bureau Admin On May 17, 2022
Share

In an interaction with the Permanent Secretaries of the Govt of Gambia, who are currently in India to attend a one week Capacity Building Programme on Public Policy and Governance, Union Minister of State (Independent Charge) Science & Technology; Minister of State (Independent Charge) Earth Sciences; MoS PMO, Personnel, Public Grievances, Pensions, Atomic Energy and Space, Dr Jitendra Singh emphasised technology and Artificial Intelligence (AI) driven governance, which, he said, is going to become an essential part of our future working.

Dr Jitendra Singh said, Prime Minister Narendra Modi has given a clarion call for adopting Next Generation Reforms by bridging the gap between government and citizens. He said, in order to translate this vision into reality, several initiatives such as Secretariat Reforms, Swachhta Campaigns, Benchmarking of Governance and Services, Redressal of Public Grievances & Improving Service Delivery, recognizing meritocracy and replication of good governance practices have already been undertaken. This is the 3rd Capacity Building Programme being organised for Permanent Secretaries of the Gambia by National Centre for Good Governance, NCGG in collaboration with MEA under ITEC. 25 participants are attending the training programme being held in New Delhi from 16th May to 21st of May. This programme is being organised under the aegis of the MoU signed between DARPG and Public Service Commission of the Gambia on 8th July, 2021 on Refurbishing Personnel Administration and Governance Reforms.

After giving a patient hearing to many of the Gambian Secretaries, Dr Jitendra Singh informed the delegates that India’s shining governance and electoral reforms are being emulated by several countries in the world. He told the secretaries to adopt technology-based reforms in administration. The Minister said, India is celebrating its 75th year of Independence as Azadi ka Amrut Mahotsav and it is the fittest occasion to underline that bilateral relations between India and Gambia have been very cordial and friendly. 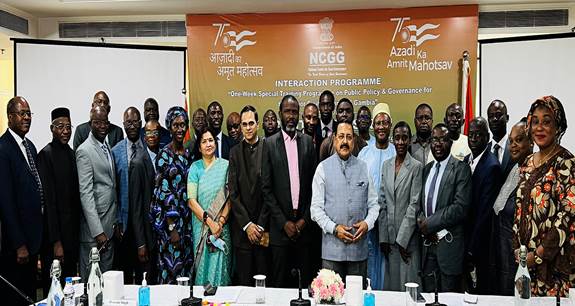 The Minister said, the widespread adoption of e-office has created paperless offices in the Central Secretariat and enabled smooth governance functioning not only in the pandemic but also in day-to-day functioning. The organisational reforms coupled with significant reforms in Personnel Administration undertaken by the Government include Mission Karamyogi and Lateral recruitment. The Central Secretariat has adopted the initiative of increasing efficiency in Decision Making in Government wherein the channel of submission has been reduced to not more than 4 levels from 7-8 levels. The Desk officer system adopted by the Government has ensured single point of file disposal. This has shown increased efficiency in processing of cases.

Dr Jitendra Singh said, Mission Karmayogi envisages continuous capacity building of every officer through digital mode in order to prepare him for every new assignment taken up by him and at the same time also enable the authorities to scientifically choose the right officer for the right assignment. The main mantra is moving from ‘rule based to role based’ governance. Similarly, as part of reforms in the field of recruitment, the GoI has constituted the National Recruitment Agency (NRA) for conducting Common Eligibility Test (CET) in order to provide a level playing field to every job aspirant across the country, regardless of his socio-economic background, the Minister added.

The Minister said, in order to redress public grievances, there is a dedicated Centralised Public Grievances Redress and Monitoring System (CPGRAMS) online system for grievance redress. CPGRAMS facilitates citizens to lodge their grievances for redress from anywhere and anytime (24×7). The year 2021 witnessed 21 lakh Public Grievances cases being received on the CPGRAMS with 19.95 lakh cases being redressed.

Dr Jitendra Singh conveyed his best wishes to all the Senior Permanent Secretaries of The Gambia for the training programme and also for a comfortable stay in New Delhi.

Referring to the usefulness of Capacity Building training programmes, Mustapha Jawara, High Commissioner of Gambia requested Dr Jitendra Singh for more such training modules for mid-level officers besides the senior secretaries in the Gambian government. He sought specific help from the Indian government in areas like pension system, grievance redressal and e-recruitment. The Indian Minister agreed to extend all help and added that the best practices in other governance areas will also be shared with the African partner.