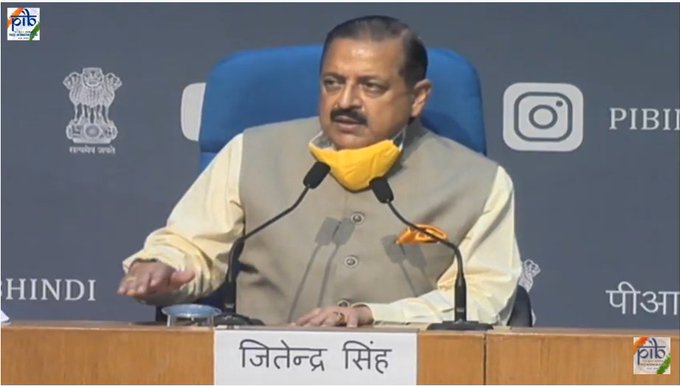 New Delhi: The Union Minister of State (Independent Charge), Development of North Eastern Region (DoNER), MoS PMO, Personnel, Public Grievances, Pensions, Atomic Energy and Space, Dr Jitendra Singh today said that the decision of the Cabinet to set up a National Recruitment Agency to conduct Common Eligibility Test is a historic, visionary and revolutionary reform in the field of recruitment for Central Government Jobs. Briefing the media here, he said that the decision marks a paradigm shift in Government Recruitment process. He said the multi-agency body called the National Recruitment Agency (NRA) will conduct a Common Eligibility Test (CET) to screen/shortlist candidates for the Group B and C (non-technical) posts and will provide a level playing field to all candidates.

Dr. Jitendra Singh said that the move will not only lead to Ease of Recruitment, Selection and Job placement, but will ultimately ensure Ease of Living, as about 1000 centres, one in each district will be set up, where candidates can take the test. He said, the measure will immensely help the candidates from the far flung and hilly areas and particularly the girl candidates, besides saving their valuable time and resources.

Dr. Jitendra Singh said that NRA will come into force from next year and will be headquartered in Delhi. The Minister informed that State Governments will also be advised to come on board in a true spirit of Cooperative Federalism. He also hoped that in near future private sector will also join the NRA. He said, NRA will have representatives of Ministry of Railways, Ministry of Finance/Department of Financial Services, the SSC, RRB & IBPS. It is envisioned that the NRA would be a specialist body bringing the state of the art technology and best practices to the field of Central Government recruitment.

Dr. Jitendra Singh said that there will be two tests per year under NRA and the scores of the candidates will remain valid for three years. He said, besides Hindi and English, tests will be conducted in 12 languages in due course and efforts will be made to include all the languages mentioned in the 8th Schedule of the Constitution.

The Minister said that the multiple recruitment examinations are a burden on the candidates, as also on the respective recruitment agencies, involving avoidable/repetitive expenditure, law and order/security related issues and venue related problems.

He said that on an average, 2.5 crore to 3 crore candidates appear in each of these examinations, but a common eligibility Test would enable these candidates to appear once and apply to any or all of these recruitment agencies for the higher level of examination. This would indeed be a boon to all the candidates, he added.