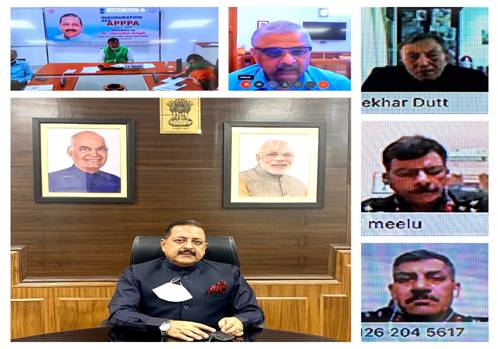 Addressing the inaugural session of 46th Advanced Professional Programme in Public Administration (APPPA), through video conference, organized by Indian Institute of Public Administration (IIPA), Dr Jitendra Singh said, India’s fight against Corona proved effective because of the early lockdown announced by Prime Minister Narendra Modi. He said, the prompt administrative measures saved India from slipping into a crisis situation seen in several advanced countries of the world with a much smaller population and added that the population size of the country and its geographical spread presented a challenge which was diligently dealt by the administration in India.

Dr.Jitendra Singh said, with continuing evolution over the years, the iron curtain has gone and now the civil servants are called upon to build bridges with the public and deliver a citizen-centric and transparent model of governance. District Collectors are often holding public durbars to redress the grievances of the common man at their doorstep, he said.

In the last 5 to 6 years, Dr Jitendra Singh recalled, a series of reforms were undertaken under Prime Minister Narendra Modi. Referring to some out of box decisions since May 2014, he said that the decision to do away with the time old practice of getting documents attested by a gazetted officer and replacing the same with self-attestation, doing away with interviews for lower rung selections, abolition of more than 1500 obsolete rules/laws, three-month Central Government stint as Assistant Secretaries for IAS officers in the beginning of their career, amendment in the Prevention of Corruption Act and new format for PM’s Excellence Awards of DARPG with more than 98 percent participation are revolutionary in nature. He said that moving away of Excellence Awards from individual profile to flagship programmes is really historic in nature.