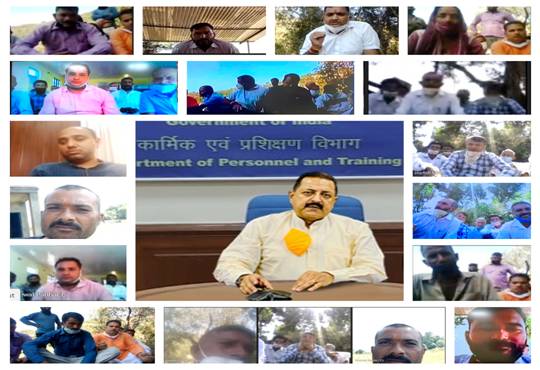 New Delhi: Describing the vested interests, who are opposing the new Agriculture Legislation as enemies of farming community and supporters of the exploiters, Union Minister Dr Jitendra Singh said today that Farm reforms introduced by Prime Minister Narendra Modi allow liberty to choose the crop cost and give the farmers the freedom to have more buyers and flexibility in choosing the price at which they sell their produce, while at the same time continuing with the established MSP system.

Continuing with his outreach programmes with farmers and public representatives at village, Panchayat and Block level, Dr Jitendra Singh was today interacting with the farmers, village representatives and local activists in Basantgarh and Chowki blocks of Tehsil Ramnagar in district Udhampur of Jammu & Kashmir.

Dr Jitendra Singh alleged that the irony is that those who are masquerading as the supporters of the farmers by protesting against the Modi government reforms are actually hand-in-glove with those who have over the years held the farmer as their captive by picking up his crops at peanut price and selling it in the market at manifold price. The sad outcome of this was, he said, that while these middlemen and market manipulators made a fortune out of it and continued to flourish for generations together, the farmer became poorer and poorer.

Not only have the farmers been treated with ruthlessness, said Dr Jitendra Singh, but also with extreme insensitivity, which led to suicide by several farmers who were anguished and desperate but not heard. With the Modi government having placed specific safeguard and security provisions in place, the farmers will have a window of relief and reprieve in difficult situations, he added.

Going by the record of the last six years, Dr Jitendra Singh reiterated that there can be no room to cast any doubts on the intention of the Modi government. He said, it is the Modi government that had conceived and implemented reforms which no government in the past ever thought of bringing and which include soil health card, Pradhan Manti SammanKisanNidhi depositing money in the account of the farmers, FasalBimaYozna, Neem coated urea and creation of FPOs.