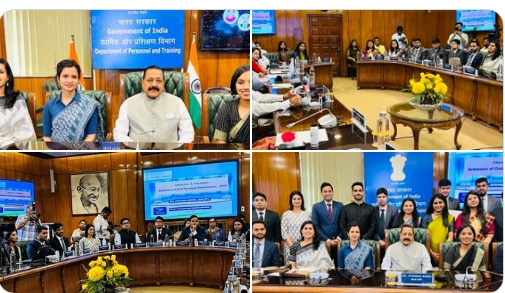 New Delhi: Union Minister of State for Personnel Dr Jitendra Singh today interacted and felicitated first 20 All India Toppers of Civil Services Exam 2021 who called on him at the Department of Personnel and Training headquarters in New Delhi today.

In his welcome address, Dr Jitendra Singh described the 2021 batch of Civil Servants as the Architects of Century India. He said, when India is celebrating Azadi Ka Amrit Mahotsav coinciding with the 75th Year of India’s Independence, this Century Batch with 25 to 30 years of active service ahead will charter a new course when independent India turns 100.

The Minister said, onus will be on them to become an active partners in realising Prime Minister Narendra Modi’s vision of New India that leads the rest of the world. He said, under Prime Minister Modi, India is already on the ascent and Civil Servants of this new genre have the privileged responsibility of taking it to the top league in the global arena.

Dr Jitendra Singh pointed out that apart from the first three toppers in Civil Services Exam-2021, there are 8 female candidates out of 20 toppers, which is nearly 40 percent and asserted that we are closely arriving at gender parity. The Minister also took note of the demographic change happening over the last few years and said that they represent a pan-India coverage. He said, this gender and demographic change augurs well for a diverse country like India.

The Minister also underlined that even candidates having done schooling from Kendriya Vidyalaya, Navodaya School and Government schools are cracking the exam, while earlier it was mostly confined to elite schools.