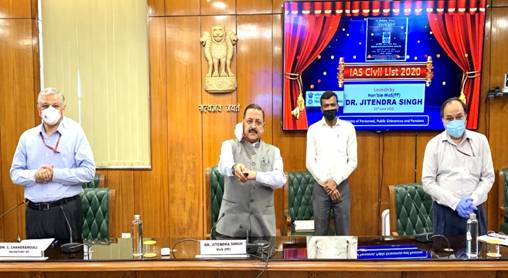 New Delhi: Union Minister of State (Independent Charge) Development of North Eastern Region (DoNER), MoS PMO, Personnel, Public Grievances & Pensions, Atomic Energy and Space, DrJitendra Singh today launched the IAS Civil List-2020 and its e-version here. He said that the dynamic list will help in selecting right officer for the right assignment based on available profile and is a vital source of information on the officers manning various posts for the general public.

This is 65th edition of IAS Civil List and the 2nd e-Civil list with photographs of the IAS officers of all the State Cadres. The List also contains the information of IAS as per batch, cadre state, present posting, pay and allowances, education and superannuation.

Dr Jitendra Singh said that the push given to DoPT in the last 5-6 years by Shri Narendra Modi Government resulted in number of innovations and reforms for the common public good. Referring to a series of out of box decisions since May 2014, he said that the decision to do away with the time old practice of getting documents attested by a gazetted officer and replacing the same with self-attestation, three-month Central Government stint as Assistant Secretaries for IAS officers in the beginning of their career, PM’s Excellence Awards of DARPG were revolutionary in nature.

The Minister said that theproposal for establishment of a National Recruitment Agency is at an advanced stage and when introduced, it will be recorded in the annals of history for providing level playing field to the candidates. The NRA will conduct computer based online Common Eligibility Test for recruitment to non-gazetted posts with test centres in every district. He also took satisfaction in mentioning that so far more than 25 lakh officers have registered on iGoT fitted to the training needs of frontline workers tackling COVID-19. He underlined that this measure will help in training an IAS officer into a Corona Warrior. Similarly, more than 50,000 public grievances regarding COVID has been received in the Grievance Cell, which will soon touch one lakh mark with redressal time of 1.4 days. Dr Jitendra Singh said that all these reforms and initiatives will ultimately lead to Ease of Governance resulting in Ease of Living.