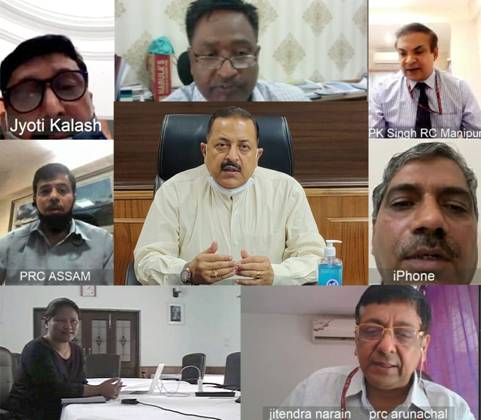 Dr Jitendra Singh briefed the representatives of different States/UTs about the various arrangements made in the last two to three days for the movement of the people living in different parts of the country to reach their respective native places. He said, the process of Shramik Special trains is continuing and appreciated the role of Resident Commissioners, many of whom were designated Nodal Officers, for coordinating the same.

Ministry of Electronic and Information Technology…

Dr Jitendra Singh said, his office was in regular touch with all the State and UT governments and the Resident Commissioners have been asked to follow up with his office and the Centre, issues related to their respective States and UTs. He also observed that while Northeast had received all-round appreciation for effective management against Corona spread, Jammu & Kashmir and Ladakh had decisively fared better than many other States and UTs in the country.

One after the other, each of the Resident Commissioners conveyed to the Minister that there was no shortage of essential supplies or medical equipment in their respective States or UTs and thanked the Minister’s office for continuous follow up of each of their issues. They also spelled out how they were effectively trying to streamline the movement of migrant labourers and students so as to ensure that crowding was avoided and, at the same time, the requests received were also duly responded.

The Resident Commissioners also gave positive feedback from among all sections of people about the 20 lakh crore package announced by Prime Minister Narendra Modi. They said this had been universally welcomed in each of the States and Union Territories.