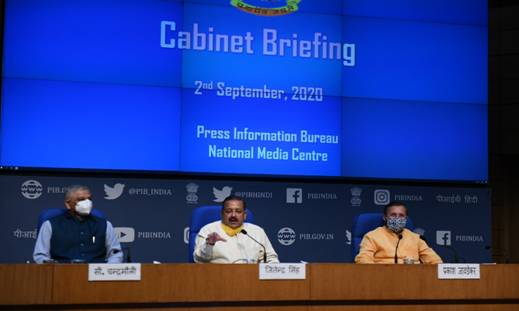 New Delhi: Union Minister of State (Independent Charge), Development of North Eastern Region (DoNER), MoS PMO, Personnel, Public Grievances, Pensions, Atomic Energy and Space, Dr Jitendra Singh said,passage of Mission Karmayogi-a National Programme for Civil Services Capacity Building (NPCSCB)by the Union Cabinetwill go a long way in creating a new future ready civil service for a New India. Briefing the media, he said that it is an endeavor to incarnate civil services into a real Karmayogi who is Creative, Constructive, Pro-active and Technically Empowered to face the future challenges. He said this is also aimed at ending the culture of working in silos and to overcome the multiplicity of training modules.

Dr. Jitendra Singh said that revolutionary Governance Reforms were brought in during the last six years under the leadership of the Prime Minister Shri Narendra Modi. He said, after the historic passage of National Recruitment Agency on 19thAugust, 2020, the Mission Karmayogi will prove to be the largest Civil Services Reform in the world in terms of depth and spread. He added that mid-career training will be available to all services at all levels in all languagesand underlined thatthis will help in professional delivery of services at all levels of Government of India.

Dr. Jitendra Singh said, from Rule Specific to Role Specific, Institutionalized Capacity Building Training, Continuous updation of skills, ending the culture of working in silos are some of the key features of this reform process.

The Union Minister said that the ultimate aim of Mission Karmayogi is to ensure “Ease of Living” for common man, “Ease of Doing Business” and Citizen-Centricity that is reducing the gap between the government and the citizens. The Minister informed that appointing authorities will have readymade data available for choosing the right candidate for the right job. Moreover, real time evaluation will go a long way in ensuring Accountability and Transparency in Governance, he added.