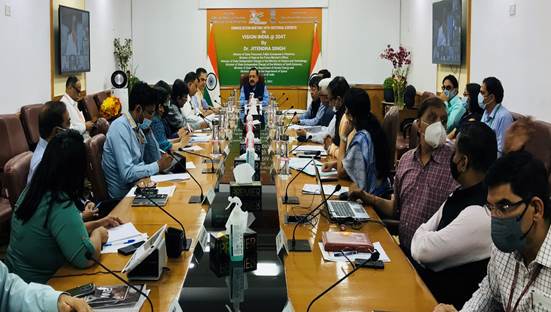 Delivering the keynote address at the Vision India@2047 conclave with sectoral experts organized by DARPG here, Dr Jitendra Singh said, the future governance models may redefine the role of a civil servant and governance may pass on more and more to citizen domain, thus truly personifying the spirit of “Minimum Government”. An intricately interwoven interface of technology, new indices and Artificial Intelligence may take over in a big way, he said.

By 2047, the Minister said, India will emerge as a frontline nation and the world would be ready to be led by us, but it is upto us to be ready to lead the world. in the Comity of Nations and the World will take cues from us in most of the critical areas of development and governance.

Referring to the journey of India in the next 25 years, Dr Jitendra Singh quoted Prime Minister Narendra Modi as saying, “In the Amrit period of Independence, we are marching ahead rapidly to create a transparent system, efficient process and smooth governance to make development all-round and all-inclusive. The Government is committed to strengthening good governance, that is pro-people, and pro-active governance. Guided by the ‘citizen first’ approach, we remain untiring in our efforts to further deepen the outreach of our service delivery mechanisms and make them more effective.”

Dr Jitendra Singh said that we have to evolve Indian Vision for India and develop Indian Solutions for Indian Problems and here the nature of Indices relevant to 2047 must be perfectly visualised. He also urged the DARPG to bring greater synergy between the Good Governance Index and the World Governance Index.

Dr Jitendra Singh said that the dictum of Minimum Government will reach its logical conclusion by 2047 and therefore there is a need for Institution-Embedded Knowledge and Experience to deliver the public service in an efficient and effective manner. He said, India at 2047 would be governed by civil servants who are currently in their 8th-10th year of Civil Service and therefore it is important to inspire and involve the young civil servants with Vision India@2047.

Dr Jitendra Singh informed that the DARPG is amongst the Ministries/ Departments of Government that is formulating its Vision India@2047 and it has constituted an Advisory Group under the chairmanship of Minister of State for PMO, Personnel, PG and Pensions with 15 Sector Specialists with National Experts from Senior Civil Servants, IIT’s, IIM’s Central and State Universities, and Public Policy Research Organizations.

The Minister said that International Experience of the United States of America, United Kingdom and Republic of Korea indicates that many of the 21st Century Administrative Reforms are based on (a) the Performance Revolution (b) the Customer Revolution and (c) the Innovation Revolution. He added that Nations have also strived to empower citizens using technology and the DARPG would seek to incorporate some of the best practices of Administrative Reforms into its Vision India@2047 following extensive consultations with key stakeholders.

Dr Jitendra Singh said that the DARPG will enhance bilateral and multilateral collaborations for mutual benefits that emerge from sharing global good governance practices. The DARPG will further work with MEA for collaborations with ITEC countries for capacity building of international civil servants. He said that DARPG will collaborate with the International Institute of Administrative Sciences to set up a world class Centre for Next Generation Administrative Reforms.

Recalling the recent DARPG-IIT Madras Conference, Dr Jitendra Singh said, ten thematic areas have been identified based on the challenging futuristic governance policy endeavours that civil servants would face in their career – Energy and Net Zero, Education, Health Care and Assistive Technology, Water, Infrastructure and Communications, Transport and Mobility, Urbanization and Housing, Rural Development and Agriculture, Fintech and Inclusion, Information Security and Defence. He said, the DARPG would expand the ambit of young civil servants associated with the initiative by inviting more academia and start-ups to ensure that majority of young IAS officers are an integral part of specific thematic areas of Vision India@2047 on Governance and are sensitized on the challenging policy endeavours that are needed to ensure India plays a critical role in future global models of governance.

In his concluding remarks, Dr Jitendra Singh said that 21st Century Public Grievance Redressal would be based on single window agencies which will help citizens use information for seeking better services. Contemplated steps include – One Nation-One Portal, Multilingual CPGRAMS for enhanced citizen outreach, Data Analytics to measure the quality of grievance redressal, Feedback call-centres and Provision for Citizen Transcripts on the CPGRAMS portal, the Minister added. He added that the DARPG will seek to make citizens charters effective, enhance citizen participation in government through crowd sourcing of ideas, hackathons, analysis and identification of grievance prone areas, and strengthen monitoring and evaluation.