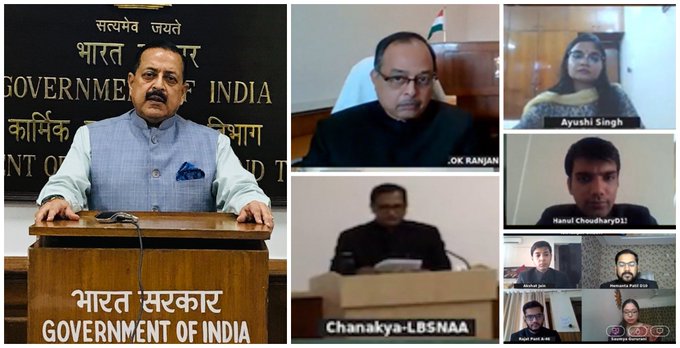 New Delhi: Union Minister of State (Independent Charge) Development of North Eastern Region (DoNER), MoS PMO, Personnel, Public Grievances, Pensions, Atomic Energy, Dr Jitendra Singh said that the Civil Servants need to continuously learn, unlearn and relearn in order to adjust to the rapidly changing perspectives in India. Asserting the need to adapt and assimilate the changes to live up to the requirements of New India, he referred to Alvin Toffler’s famous words, “the illiterates of the 21st century will not be those who cannot read and write, but those who cannot learn, unlearn, and relearn…”

Addressing the Valedictory Function of IAS Professional Course Phase II (2019 Batch) at Lal Bahadur Shastri National Academy of Administration (LBSNAA) Mussoorie, Dr Jitendra Singh quoted the address by the then Home Minister Sardar Patel on the occasion of the first Civil Services Day on 21 April 1947, wherein he had told the young IAS officers, “your predecessors were brought up in the tradition in which they kept themselves aloof from the common run of the people. It will be your bounden duty to treat the common man in India as your own”.

The Minister said, for the first time after seven decades of independence, Prime Minister Narendra Modi has personally taken the lead to give a new orientation to the Civil Services and carry forward Sardar Patel’s vision in the contemporary perspective.

He said, it was Prime Minister Modi who set a new precedent by addressing civil servant trainee officers of Foundation Course on 31st October, 2019 on the occasion of the birth anniversary of Sardar Patel at Kevadiya, Gujarat, where he outlined his vision for the civil services and civil servants of 21st Century India. In a thought provoking address, Prime Minister Modi had said “the young Indian Administrative Service (IAS) officers should go to people, and change the legacy of colonialism. We don’t expect status quo from IAS officers. Everyone is working to build New India, but our responsibility is more. The presence of silos and hierarchy does not help our system. Whoever, we are, wherever we are, we have to work together for the nation….. We need a bureaucracy that is creative and constructive, imaginative and innovative, proactive and polite, professional and progressive, energetic and enabling, efficient and effective, transparent and tech enabled”.

Dr Jitendra Singh said that Prime Minister Narendra Modi’s vision for Good Governance is reflected in new initiatives like Mission Karmayogi and Aarambh for Civil Services in the country and it will pave the way for New India. He added that despite the COVID challenges, our activities remained undeterred as the pandemic taught us many new virtues.

Exhorting the officers to develop the ability to adapt and respond to COVID-19 pandemic, Dr Jitendra Singh said, the entire world is passing through the unprecedented catastrophic situation created by the pandemic and during the current crisis; many civil servants have worked tirelessly in an excellent manner to control the COVID wave. He said Civil Services needs to transform in modern times as the levels of expectancy and transparency have increased manifold.

Dr Jitendra Singh said that administrative perspective in the country is changing rapidly and new roles and responsibilities of civil servants are emerging due to rapid socio- economic progress, urbanisation and new technological interventions. There is an urgent need to bring constant adaptability and flexibility in the roles and responsibilities by the Civil Servants to assimilate, adapt and adjust to these changes. He also said that the presence of silos and hierarchy is not good for the country and the Civil Servants must become accessible to the needy and poor at the first place. He said, as a role model before the common man, the officers must strive to work from Panchayat level to the Central level in a passionate and independent manner.

Dwelling on the theme of innovation, Dr Jitendra Singh said, it is important for the public servants to be innovative and to support, propagate and promote innovative ideas so as to provide hassle-free citizen-centric services to the common people. Innovative approaches by the public servants supported by the science, information technology can bring transformational and spectacular changes in the fields like Agriculture, Health, Education, Citizen Service Delivery, etc., leading to improved ease-of-doing and ease-of-living for common people of the country, he added.

Dr. Jitendra Singh recalled that in the last 7 years, a series of new beginnings and innovations were undertaken to provide a new orientation and direction to bureaucracy in India. He particularly mentioned that a three-month Central Government stint as Assistant Secretaries for IAS officers at the beginning of their career started a couple of years back added tremendously in their capacity building.

In his concluding remarks, Dr Jitendra Singh said that the IAS Officers should always cherish and uphold the virtues and ideals enshrined in the Constitution of India and rights, duties and responsibilities assigned to the Civil Servants of this country by the Constitution of India and thereby uphold the dignity of Indian Administrative Service in the eyes of common people of this country.

Dr. Jitendra Singh also presided over the distribution of the President of India Gold Medal and Certificate for the Best Officer Trainee and other awards for excellence on the occasion.