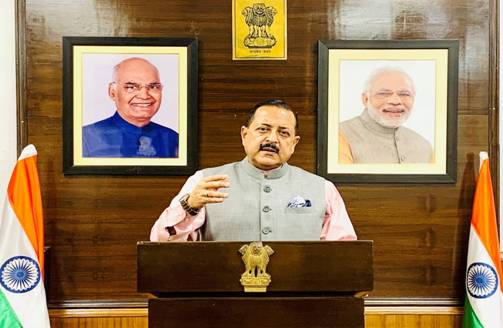 Speaking at a function to mark the 5-Year Journey of IIM, Jammu, the Minister said, the Institute has made a mark in a very short span of time and that too despite the crippling effects of COVID in the last two years. He said that the IIM Jammu is one of the major achievements of the Modi Government in the education sector in Jammu & Kashmir and is catering to all sections of society, be it region wise or gender wise or otherwise.

Dr Jitendra Singh said that Jammu has emerged as a pioneer Education Hub, where students from neighbouring States like Himachal Pradesh, Punjab are seeking academic openings and prospects. He said today Jammu can boast of having premier institutes in India like Indian Institute of Technology, Indian Institute of Mass Communication, AIIMS, upgraded Indian Institute of Integrative Medicine, National Institute of High Altitude Medicine at Bhaderwah, Industrial Biotech Park at Kathua, Noth India’s first Space Centre at Central University Jammu etc . Moreover, other centrally funded institutes like over half a dozen Government Medical Colleges, RUSA funded Engineering colleges, Ayurvedic college, an upcoming Homeopathic College and a chain of KendriyaVidyalayas in the Jammu province is a reality today, he added.

Dr Jitendra Singh said that Jammu will soon witness huge industrial investment to the tune of Rs 25,000 crore and mostly in the health Sector thus opening a large number of employment opportunities for youth in the area and also for IIM students. He, however, urged them to become job providers, rather than job seekers through innovative start-up ventures.

The Minister said, we have to come out of the entrenched mind-set of getting government jobs for all, which is neither feasible nor desirable anywhere in the world.

Dr.Jitendra Singh further said that with the historical constitutional changes happened after August 5, 2019 and the barriers of academic growth done away with, the best faculty from different fields from all over India are ready to come to J&K to serve with dedication as the previous apprehensions have gone now with the new order of law coming into existence.

Dr Jitendra Singh noted with satisfaction that beginning from a batch of 54 students in 2016, IIM, Jammu today has more than 250 students and 30 eminent faculty including six international adjunct professors. He also complimented the faculty and students for getting a beautiful complex at Jagati by 2022 with all modern facilities at par with best such institutes in India.

In his Presidential Address, Dr.MilindKamble, Chairman Board of Governors, IIM, Jammu said that it is heartening to see that IIM, Jammu is making rapid strides and has earned an outstanding reputation in such a short period of time because of its academic excellence, research, executive education and corporatized international linkages. He recalled that IIM, Lucknow played a role of mentorship during the initial years and today we are having global tie-ups for sharing academic experiences and publishing high value research papers in top class Indian and Global Publications.

In his address, the former Chairman Board of Governors, ShriramDandekar said, with new Centres of Innovation established, IIM,Jammu should aspire to become one of the finest Business Schools in the World.

Professor B.S. Sahay, Director IIM Jammu, in his welcome address, said that our vision is to develop leaders and entrepreneurs who can perform globally and give valuable contribution to the society. He also took pride in opening up the Centre of Happiness-Anandam, first of its kind in the country. Shri Sahay informed that 14 MoUs have been signed for International Exchange programmes for students and academia. He said, soon a tripartite agreement will be signed with IIT and AIIMS Jammu for joint research programmes.