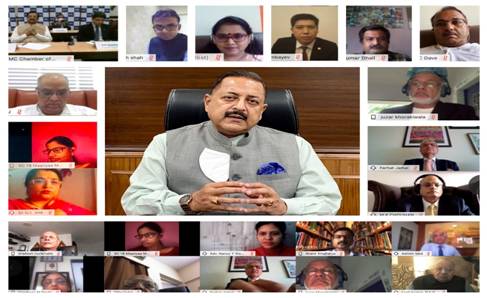 Addressing, online, the 114th Foundation Day ceremony of IMC Chamber of Commerce of Industry as chief guest, Dr Jitendra Singh recalled his long association with the Indian Merchants’ Chamber and his frequent visits to their Head Office at Churchgate, Mumbai. He said, being the oldest Chamber of Commerce in the country, of which Mahatma Gandhi was also a member, IMC has a glorious past and a great legacy, with equally high expectations from it for the future.

Dr Jitendra Singh said, self-reliant India is key to the concept of Atma Nirbhar Bharat and reputed business organizations like the IMC are expected to take a call. He said, in the post-COVID scenario, when the whole world is trying to rise to the occasion, for India it is both a challenge as well as an opportunity. Esteem of using what is available locally and the urge to create or produce what is not available locally, is the essence of “Local for Vocal”, said Dr Jitendra Singh.

Dr Jitendra Singh said that the concept of Atmanirbhar Bharat has no conflict with modernity, growth and advancement, but it is to achieve the goal of a Self-Reliant India in a peaceful, progressive and prosperous manner.

He said that care and concern for the distressed, promotion and production of local goods, moving from assembling to manufacturing are the true essence of Atmanirbhar Bharat, where one is self-reliant with esteem without depriving oneself of the fruits of development.

Dr. Jitendra Singh said that Prime Minister Narendra Modi had unveiled the Atma Nirbhar Package in the wake of Corona Pandemic to help all sectors and wheels of economy with more than Rs 20 lakh Crore, which is about 10% of GDP. He said that the Vocal for Local mantra given by Narendra Modi is fast becoming a Jan Andolan in India.

Referring to several steps taken to promote MSMEs, Dr Jitendra Singh pointed to the government notification banning global tenders to ensure that goods and services valued less than Rs 200 crore are procured from domestic firms. He said, Atmanirbhar means, we should reduce the import of goods as much as possible and produce the same not only for India, but for the World.

Giving the example of huge Bamboo resources in India and its untapped potential, the Minister said that despite 5 to 6 thousand Crores of annual Bamboo trade, the entire Agarbatti is imported from other countries. He said, now the government is taking measures to rectify the same and pointed out that the Modi Government had amended the century old Forest Act by taking home grown bamboo out of the purview of the Forest Act and the Central Government has also banned import of finished Bamboo products and raised the import duty by 25 percent on raw bamboo items, which will help the domestic bamboo industries including Agarbatti making in a big way.

Dr Jitendra Singh also recalled the great relief work carried out by IMC in the unprecedented floods of 2014 in North India including in Jammu and Kashmir and hoped that it will continue to play a stellar role to help India overcome this crisis.

President IMC, Rajiv Podar delivered the welcome address, while the vote of thanks was presented by Vice President IMC Juzar Khorakiwala.