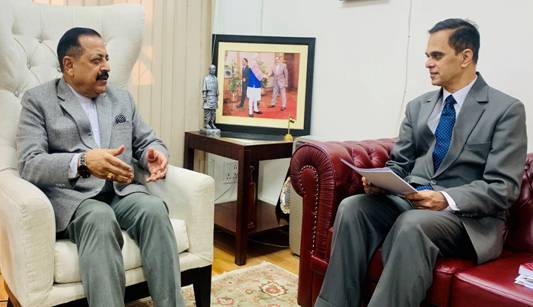 New Delhi: Jammu & Kashmir will soon become the first Union Territory in the country to have a district level Good Governance Index.

Disclosing this here today after receiving an update from the newly appointed Secretary of Department of Administrative Reforms and Public Grievances (DARPG),Union Ministry of Personnel, V Srinivas, Union Minister of State (Independent Charge) Science & Technology; Minister of State (Independent Charge) Earth Sciences; MoS PMO, Personnel, Public Grievances, Pensions, Atomic Energy and Space, Dr Jitendra Singh said, Centre will set up District Good Governance Index (DGGI) in J&K and the Department of Administrative Reforms and Public Grievances (DARPG) will carry out this task in collaboration with the Union Territory Government. The framework of the proposed Index has been finalised with the technical support from the Centre for Good Governance(CGG) Hyderabad.

The Minister said that Prime Minister Narendra Modi is keen that we should replicate in Jammu & Kashmir, the same best practices of governance which are followed in other States and UTs of the country. He said, for a long time, as a result of certain constitutional and administrative constraints, many of the Central Rules of DoPT and ARPG were not applicable in Jammu & Kashmir, but in the last over two years, there has been a fast-track attempt to change the work culture and to follow the Mantra of “Maximum Governance, Minimum Government”, which has been the guiding principle at the Centre and States ever since the Modi government came in 2014.

Good Governance Index at the district level, said Dr Jitendra Singh, will enable each of the 20 districts of Jammu & Kashmir to rise to the level of some of the best administered districts of the country, with time bound disposal of office files and other matters, increased transparency, increased accountability and increased citizen participation. He said, the next step would be to carry forward these Good Governance practices down to Tehsil and Block level.

These indicators were finalised after a series of consultations with the District officials of Government of Jammu & Kashmir, Academia, Subject Specialists, etc. Looking at the availability of authentic published data and other key principles, the set of indicators have been finalised from a larger list of 135 to 58.

To compute the index and rank, the Districts on their performance based on finalised 58 Indicators, an elaborate exercise of data collation followed by rigorous data sanitisation was undertaken. Final index computation process using standard and tested data normalisation and scoring methods is underway. This would result in coming out with Division-wise and District-wise ranks of the Districts. While there will be a comprehensive rank of Districts based on composite 10 Sectors, the DGGI will also offer a window on indicator-wise performance of the Districts.