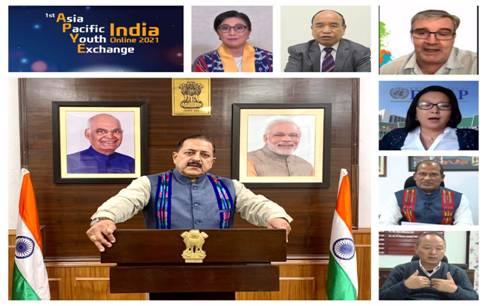 Addressing the Asia Pacfic Youth Exchange (APYE) meet along with the Vice President of the Republic of Philippines, Maria Leonor Gerona Robredo and the Chief Minister of Mizoram Zoramthanga, Dr. Jitendra Singh said, as the Minister In charge of Development of North Eastern Region (DoNER), he is pleased to note that the North Eastern State of Mizoram is hosting this meet. He said, the North Eastern region is surrounded by international borders and serves as India’s gateway to the East.

Dr. Jitendra Singh said, ever since Narendra Modi took over as Prime Minister, he has accorded a special priority to the development of the North Eastern region of India. He said, this also assumes importance because if India has to successfully engage with the countries across the eastern borders, it must have a strong basis in the areas proximal to eastern borders which comprise the North Eastern States.

With its geographical position and rich natural as well as agro-climatic resources, Dr. Jitendra Singh said, access to the growing ASEAN market is essential for optimum utilization of trade and business opportunities. He recalled how on the intervention of Prime Minister Narendra Modi, the Indo-Bangladesh Agreement was successfully accomplished resulting in the exchange of enclaves thus facilitating easier and cost-effective access to Bangladesh and other regions.

Dr. Jitendra Singh noted that in the times to come, Sustainable Development Goals (SDG) will be our guide for integrating social, economic and environmental dimensions of development. To that extent, he also appreciated the efforts made by the organizers of the Meet to hold interactions of Asia Pacific society with the local communities.

TCS Clocks Highest Brand Value Growth in IT Services in 2020

‘India an Incredible Hub of Innovation; Crucial Strategic partner for Switzerland in…