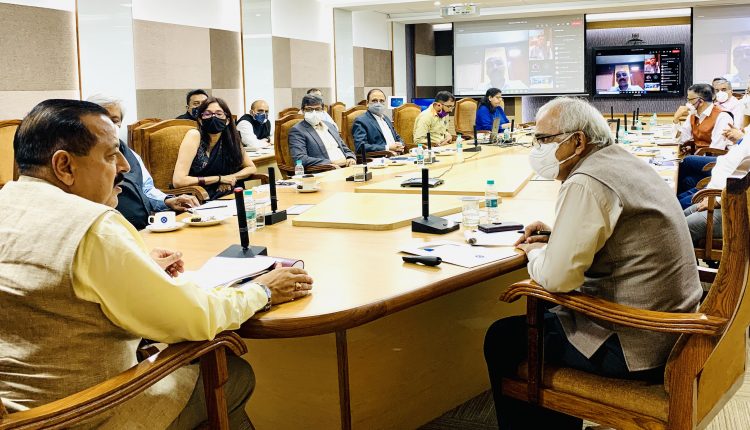 Addressing a meeting of the representatives of prominent Industry Houses of India who are CSIR Society members, he said, Public-Private model is no more an option but a necessity today. Therefore, CSIR and Industry must collaborate on an equal footing for the best and cost-effective outcomes, he said.

Commenting on the progress made by India in the last 7 years, Dr Jitendra Singh said that the present dispensation has removed scientific taboos and opened up the field to private players and start-ups. He said that in the past, science and technology could not flourish because of lack of resources but it is happening now and India is emerging as a leading global player since privatization has been made possible by Prime Minister Modi.

The Minister said, the era of working in silos is over and asked the CSIR to work on theme based projects in collaboration with Industries for visible impact on the ground. He asked CSIR to suitably identify the stakeholders in its Mission Areas like Green Hydrogen, Carbon capture, Coal Gasification, Fly Ash technology, High Altitude Platforms for telecommunications, surveillance, remote Sensing and disaster recovery, and sectors like Drone Technology and Agri and Pharmaceutical Chemicals. He also asked to explore the emerging areas like Additive Manufacturing, Chemicals for Fab and High Temperature Steams for Electrolysis.

Dr Jitendra Singh said, the world has seen how Prime Minister Modi has championed the cause of Green Technology to fight the challenges of Climate Crisis. He said, even in his Independence Day address, Shri Modi underlined that Science and Technology will play a lead role in next 25 years, when India turns 100. He said, the ultimate aim of all technological innovations is to bring “Ease of Living” for common man.

Referring to Corona Pandemic, Dr Jitendra Singh said COVID-19 taught us to come out with best indigenous technological applications within a short span of time be it manufacturing ventilators by CSIR, vaccine production by DBT, Liquid Oxygen by ISRO or Reusable PPE Kits by Department of Atomic Energy. He said, even the roadmap for the next 25 years will be determined by scientific and technological innovations in all walks of life.

Dr Jitendra Singh assured the Industry representatives of positive response on their suggestions like Audit of CSIR Labs to weed out outdated research, flow of Investment for R&D set up and Hand-holding by the Government in cutting edge research through Multi-Institutional Collaborations.

Tourism can be a game changer that can bring socio-economic change in the nation especially in NE region: G. Kishan Reddy