Speaking at the Convocation ceremony of 46th and 47th Advanced Professional Programme on Public Administration (APPPA) in New Delhi, Dr Jitendra Singh said, the current challenges also demand a healthy mix of Civil and Military disciplines and more and more integration of courses are required. 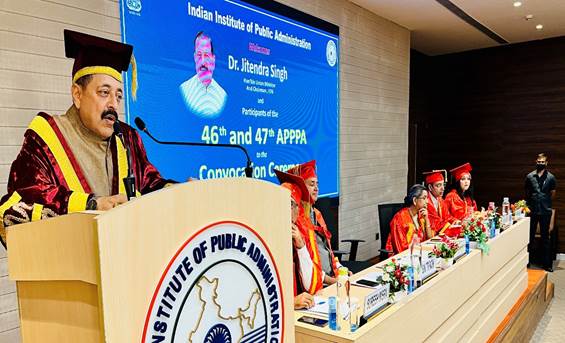 On the occasion, Dr Jitendra Singh presented postgraduate degrees of M.Phil and Diploma in Public Administration to 31 participants of 47th APPPA and M.Phil. Degree through Punjab University, Chandigarh to the participants of 46th APPPA. 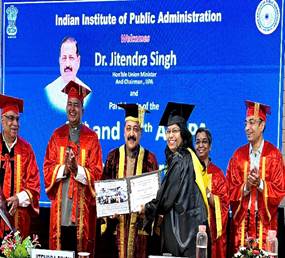 Addressing the Convocation, Dr Jitendra Singh noted with satisfaction that the APPPA Course has undergone changes and new areas like Atmanirbhar Bharat and Mission Karmayogi apart from other important government initiatives have been covered. He said, this makes the course more relevant and useful and it has given a good exposure to rural and urban development schemes. It has helped the officers in better understanding and appreciation of various socio-economic schemes, the Minister added.

Valediction Ceremony of the 74th Batch of Indian Revenue…

Qualcomm and MeitY’s Centre for Development of Advanced…

Dr Jitendra Singh said, exposure to foreign training has some merits, but administrators must focus to find Indian solutions to Indian problems. He also recalled that IIPA has been resilient enough to tide over the precarious pandemic situation and dispense with the conventional mode of face-to-face training, however there was some blending whenever the circumstances demanded so.

The Minister said, 47th APPPA, besides the number it carries had many more significances as it became the first batch ever in the history of IIPA to be an audience to the oration of special address by the in-service chiefs of all three wings i.e. Army, Navy and Air force. The 47th Advanced Professional Programme on Public Administration (APPPA) has come to a conclusion after 10 momentous months.

Referring to the drastic and visible change in the work culture since May, 2014, when Prime Minister Narendra Modi took charge, Dr Jitendra Singh pointed out several out of box decisions like doing away with the time old practice of getting documents attested by a gazetted officer and replacing the same with self-attestation, doing away with interviews for lower rung selections and abolition of more than 1500 obsolete rules/laws.

The Minister was informed that in the 46th APPPA course, the participants got the opportunity to visit Gujarat, Sikkim, Darjeeling as part of their rural, urban and forward area visits and IIPA organized special lectures and talks on very relevant topics of Indo-China Border Conflicts, Indo-Pakistan Relations, Mission Karmyogi & FRAC Strategy, New Education Policy etc. which enriched the knowledge the participants of 46th APPPA. 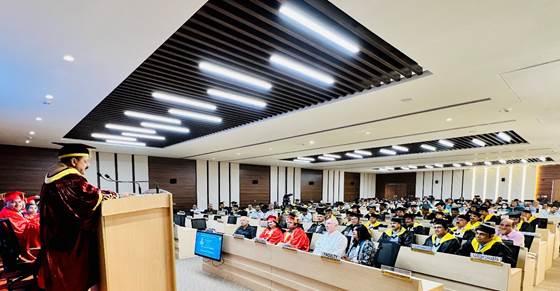 The APPPA course got started in 1975 and was first of its kind in the Mid-career training segment designed for middle level Civil Servants and Defence forces officers. About 1600 officers have attended this course so far from 1975 and this programme has been the flagship programme of IIPA.

APPA deals in a variety of subjects useful for middle level officers to prepare them for more responsible leadership and decision-making positions. It encompasses a wide range of modules from Public Administration, Finance, Digital Governance, Cyber Security, Agriculture economics, Urban Governance and Consumer Protection to Environment and Climate Change and Social Systems.

Valediction Ceremony of the 74th Batch of Indian Revenue Service in NADT, Nagpur

Valediction Ceremony of the 74th Batch of Indian Revenue Service in NADT, Nagpur

If NEP is the guiding philosophy, then NCF is the pathway and this mandate is the…