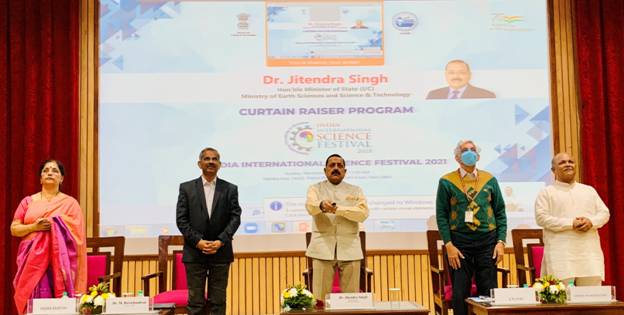 Dr Jitendra Singh said in Prime Minister Shri Narendra Modi’s India, science is not only a subject of research, but has assumed the dimensions of festivity and there is a need for celebrating Science Festival in every city and village of India to inspire the youth in critical thinking. He was speaking at the Curtain Raiser event here for the seventh edition of India International Science festival (IISF- 2021) to be held at Panaji, Goa from December 10 to 13, 2021.

Dr Jitendra Singh said, the theme of IISF 2021 is ‘Azadi Ka Amrit Mahotsav’ – Celebrating Creativity, Science, Technology and Innovation for a prosperous India. He said, this year twelve programs will be conducted in this mega event based on this theme. He said, India is celebrating the 75th year of its independence and it is time to lay down the road map for the next 25 years before independent India turns 100. The Minister said, it is a proud privilege and opportunity for the youth of India today to be able to contribute to the making of India when it turns 100 in 2047 and stands as a frontline nation in the world community.

Dr Jitendra Singh said that the series of India International Science Festival (IISF) is an integral part of India’s long-term vision in developing and widening the spectrum of scientific temper for sustainable development and new technological innovations in India. He said, it also aims to build a strategy for rural India through the advancement of Science and Technology.

The Minister informed that IISF will provide a platform to young students, scientists and technocrats from across India for exchange of knowledge and ideas and also supporting flagship programmes like ‘Swach Bharat Abhiyan’, Swasth Bharat Abhiyan ‘Make in India’, ‘Digital India’, ‘Smart Villages’, ‘Smart Cities’ ‘ Namami Gange’, ‘Unnath Bharat Abhiyan’ initiated by the Prime Minister Narendra Modi in the last seven years. He said, the main aim of the Science Festival is to bring into use the innovations by the people and develop technology that is affordable to the masses.

Dr Jitendra Singh said that this year India is celebrating 75th year of Independence as AazadiKaAmritMahotsav and the Prime Minister Shri Narendra Modi has given the ideas of five pillars to celebrate it, which will be reflected through various programs in IISF 2021.

India International Science festival (IISF) is a joint program of Ministry of Science & Technology, Ministry of Earth Sciences and Vijnana Bharati (VIBHA) a swadeshi movement of Bharat. The first program of IISF was held in year 2015 and sixth edition of this annual event was organised in year 2020. The main purpose of IISF is to celebrate science along with people in India and across the globe.

The programmes to be undertaken during these four days of festival are as follows:-

a) Science Film Festival : The India International Science Film Festival (IISFF) seeks to promote science popularisation among citizens and aims at attracting talented young science film-makers and science enthusiasts. The IISFF offers an opportunity for students and film makers to get involved with the process of science communication through films. During the festival internationally acclaimed and award-winning foreign and Indian films on science, health and environment will be screened via online platforms.

b) Science Literature Festival: The focus under this event would be on the contribution made by Scientists and the available scientific literature starting from pre-independent India.

d) This event focuses on spreading technical knowledge by bringing together the best minds from the engineering world through a platform of interactions under IISF 2021. Innovative products/ projects as well as ideas developed by students will be showcased at the venue. Students will be promoted to adopt User Inspired Basic Research, a confluence of new knowledge and application.

e) Science Village Festival: The prime goal of this event is to give exposure to the students from rural areas about new frontiers of science and technology. The Science Village programme is linked with Sansad Adarsh Gram Yojna and the Parliamentarian will be nominating five students (class 8 to 11) and one teacher from their adopted village to participate in the IISF 2021. However, in order that COVID protocol are followed this year it has been decided that this programme will be conducted in a hybrid mode wherein the nominated students from rural areas of Goa will participate physically whereas the students from the other States will join the event in a virtual mode. The participants will be able to undertake activities like hands-on scientific experiment, poster presentation and city tour in addition to being able to participate in talks by eminent scientists.

f) Traditional Crafts and Artisans Festival : This event shall endeavour to bring focus on to the primitive tribes of our country and the developmental activities which they undertake. Most important being the traditional Indian arts and crafts, information on the life of the artisans and the future prospects of their activities will also be brought out. Traditional Indian arts and crafts are one of a kind because of the use of natural fibres and natural dyes. The event will have live streaming and demonstration for extraction and processing of the fibre, yarn and rope making and other handicrafts and other products. This programme will bring together traditional craftsmen and artisans, researchers and scientists, entrepreneurs, cottage industries, Self Help Groups, Policymakers and students and offer them a platform to discuss the Indian traditional crafts. Also inviting practical suggestion to make these globally competitive, that leads the way to Atma Nirbharta.

h) Festival of Games and Toys : This event aims to revive the long tradition of eco-friendly toys and games. This event will not only seek to motivate and develop mind, concentration and logical thinking of students’ participation but also may lead to driving them away from electronic gadgets. This event will also provide a platform for local manufacturers to display their products.

i) Global Indian Scientists and Technocrats Meet : An eminent group of Indian Scientists and Technocrats diaspora would be invited for brainstorming sessions on ‘Disruptive technologies and opportunities of artificial intelligence and its applications’, which is expected to lead to exchange of knowledge. This event would also organise interaction of themes relating to empowerment of rural masses through enabling technologies.

j) Eco-Festival : The major challenges of the world today are energy, security and environmental concern and renewable energy is seen as the solution for both problems. The Eco-Festival 2021 will focus on Renewable Energy for self-reliance and sustainable development for all showcasing scientific and technological development and deliberating on the various forms of innovations that the country will need to establish its footprint in the greener economy.

l) National Social Organisations and Institutions Meet : This event aims to bring together science oriented social organisations, research and academic institutions, social entrepreneurs, social researchers and workers, especially, grassroots voluntary developmental organisations engaged in societal development and nation building through the intervention of science, technology and innovation. This programme will be organised with the active support of Vibha Vani India – a National Consortium of Grassroots Developmental organisations and Scientific Institutions. The focus would be on identifying and showcasing developmental models that will help in livelihood improvement through entrepreneurship and technology and self-reliant community development.